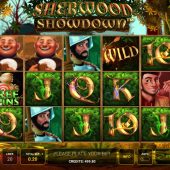 Sherwood Showdown slot by Novomatic takes us back to the theme of the mythical medieval and benevolent bandit, Robin Hood. Previously this has been covered by many a developer, with Netent's Robin Hood - Shifting Riches and the old classic from Incredible Technologies Robin Hood - Riches of Sherwood Forest. Here we have a glossy background which surprisingly enough consists of a forest and jaunty medieval music to play to with all the expected characters on the reels. So will this be a case of Robin our bankroll or robbing the rich?

Nothing out of the ordinary with a standard 5x3 grid here offering 20 fixed pay lines and single symbols with the exception of the Shield on Sherwood Showdown slot. The 5-of-a-kind pays are Wild or Shield 15x bet, Marian or Woodsman 10x, Friar or Knight 5x with five card values paying either 2 or 1x bet for a full line. Straw Man scatters appear on the odd reels and unusually for Novomatic we get several random modifiers!

Robin may appear from his tree on the left and start firing arrows.
Horn Blower - reels rotate to reveal a winning combination, may repeat.
Fox Runner - foxes run over each column to create a win, may repeat.
Winning Shot - Robin fires arrows multiple times which all turn a tile to the same symbol.
Stepping Streak - reels will step in the direction Robin's compass shows, creating a win and can repeat too.
Fill the Nest - Robin shoots down a birds nest which then has eggs dropped in to reveal multipliers up to a maximum of 20x, for that spin.
Reel Rise - if scatters appear on reels 1 and 3, Robin may extend reel 5 to increase the chance of the third scatter.
In all cases the Wolf may appear on the right and stop Robin's arrows and the feature ends.

You need the Straw Man scatters on reels 1 and 3 and a coin on reel 5. You get 5 free games which can be one of five types - bronze, silver, gold, platinum or king. You then get free spins with that particular coin added to the reels and respectively they guarantee the minimum coin multiplier will be 1 to 5x. The free games are normal but with more Wilds and high symbols on the reels. If during them the coin lands you then start the Coin Streak on the reels and any coin landing displays a multiplier x stake and awards a respin. The spins stop the moment no further coins are added.

Sherwood Showdown slot is good as far as animations, sounds and graphics are concerned. The RTP is normal Novomatic fayre at 95.13% and there is very little potential in the base game and sadly too in the bonus rounds and especially the free spins which cannot really pay over 300x bet. therein lies the problem, you get plenty of entertainment for your money but once you get too far down the low volatility will ensure you'll not get back to par. This is one instance where I wish the Sheriff would actually catch Robin Hood once and for all...