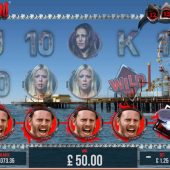 Sharknado slot is from the Isle of Man-based Pariplay which may surprise you to learn, especially after Australian slot game behemoth Aristocrat released Sharknado land-based slot towards the end of 2016. But I can confirm that the rights for the online version were sold to a different firm and that was Pariplay. Sharknado was a dreadful B-Movie made for TV in 2013 centred around a waterspout off of Los Angeles Beach Funfair which sucked up killer sharks and dropped them on the city!  Naturally heroes emerged to battle these sharks on the ground and in the air via helicopter and all was good in the end. The movie was so bad it became a cult classic and believe it or not a few sequels were made! So will Sharknado slot be met with the same initial derision as the film?

Our killer sharks offer up a variety of features on a 5-reel 3-row grid with 25 pay lines. The reels are transparent and cover the sea where the drama starts and the graphics are quite impressive. We cannot say that about some of the soundtrack - the spooky dramatic musical score is quite good, but the corny Sharknado theme tune is sung in a punky sort of style by what sounds like a bunch of drunken high school teenage boys; then again knowing this film it may well have been. There are single symbols but it is possible to get 2 on the reel of the lower card symbols.  Pays are quite good with 5 Wilds offering 80x stake for 5-of-a-kind, the female heroine 60x and her 3 friends 40, 24 and 16x stake respectively.  Chainsaw scatters appear on all reels to trigger the free games - one of these was used in the film to cut open a shark and find it full of money in case you're wondering.

There are 2 features you may see in the base game: Firstly (and rather annoyingly) a small waterspout appears on the game, then a helicopter flies across and drops a nuclear bomb which if it hits the reels will explode and send some random Wilds over the grid, or most usually the bomb will be swallowed harmlessly by a shark and you get nothing. Secondly, a random 'Sharknado' may occur. The background becomes one giant waterspout and one of the 2, 3, 4 or 5x multipliers will light up in the sharks' mouth above the right hand reel. You'll get a random number of paid games then that have this multiplier applied to all wins, usually 6-12 spins. It cannot retrigger and nor can you get the free spins during it.

Should you land 3 or more chainsaw scatters you are awarded 5 to 10 free games, 4 scatters 11-15 and all 5 give 15-20. These cannot be retriggered, nor can you get the random Sharknado multiplier mode in them. In fact there are no enhancements or extra Wilds and I found this stranger than the film!

Sharknado slot has great graphics which I would expect from a Trademark Game. If you like the film you'll like the slot especially with its generous 95.95% RTP and the original soundtrack in the background. The pays are quite good in the base game but there are two significant drawbacks: the random helicopter appears too frequently and slows your game down and is pointless on nearly every occasion. But even worse is the format of the free spins which aren't hard to get but have absolutely no enhancements! Given that you cannot get the random Sharknado multiplier mode in them, in fact they are worse than the base game spins which I have never seen before on any slot - earn free spins to be disadvantaged! I must say I liked the look of this game initially, but having spent some time playing I can certainly say Sharknado slot hasn't left me bitten...