Curse of The Werewolf Megaways slot 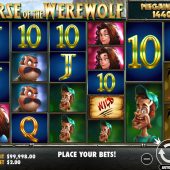 Curse of The Werewolf Megaways slot by Pragmatic Play is their fourth entry into the Megaways arena and quite different from the others. Whereas Great Rhino Megaways was simply based on the Great Rhino 4096-way slot and Starz Megaways was a relatively simple game, here we have a more complex yet fun slot. You have the gloomy Victorian street as a creepy backdrop, but the the noises and characters are rather on the juvenile side so it doesn't really go together. So is this werewolf going to get its fangs into our bankroll, or will we be cursing with delight?

We get 6 reels of 2 to 6 symbols so 64-46656-ways to win on Curse of The Werewolf Megaways slot. Symbols are stacked and single, with Wilds singly on reels 2-6 only and the winning symbols don't get replaced in this instance, nor is there a scrolling reel above the grid. The pays are 10x bet for 6-of-a-kind Red Wolf, Boy with Cap 5x, Girl 2.5x, Man 2x, Boy in Green Cap 1.5x with five card values of either 1 or 0.5x for a full way. You can get random Howling Wolf symbols in any size stacks on all reels which are Mystery Reveals of the same paying smbol and may or may not give a win. Moon Bonus scatters appear on all six reels too, but we get a couple of modifiers.

Randomly, the game logo will shimmer and the Werewolf may award one of two modifiers.
Big Win - you will get a spin which pays 15x or more, the big win threshold.
Super Spin - you will get just stacks of the premium symbols on the reels.

Here we get 8 spins for 3 scatters, 10,12 or 15 for 4,5 or 6 respectively. You can earn extra spins for 2 or more scatters which will all give 1 extra for each scatter from 2-5, but 10 extra spins for all 6. You will now see some of the Red Wolf top-paying symbols are Gold. You can also see the 4 character symbols on the left of the grid, with 8-segments around them. Each Gold Wolf will still count as a Red Wolf but will slash the segments away from 1-5 at a time for each Gold Wolf landing. Once you fill the symbol, it upgrades to the top Red Wolf on the reels for the remaining spins and adds +1 spin to your total left. Do this for 3 or more of the 4 characters and you should see a few 30, 40 or 80x bet spins during the bonus.

Curse of The Werewolf Megaways slot has the usual good Pragmatic 96.50% RTP to start us off. The base game pays reasonably well but you will find the best wins come from the modifiers or Mystery symbols appearing. Despite the slightly juvenile sound and appearance it isn't tiring to play plus the free spins aren't that hard to land compared to some Megaways games like Bonanza. It's hard to get all 4 characters converted in the bonus, but if you achieve 3 of them you should get over 100x bet at least, although we are told 40,000x is possible. I wouldn't curse that much if I met this werewolf again...