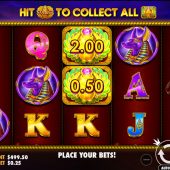 John Hunter Tomb of the Scarab Queen slot by Pragmatic Play is the second in this John Hunter explorer-themed series, coming quite soon after the Da Vinci's Treasure version. Like that game it has a convoluted title which in full is 'John Hunter and the Tomb of the Scarab Queen' and there I was thinking Play'n Go's Rich Wilde and the Book of Dead was strung out!  For explorer themes I prefer Novomatic's far simpler Book of Ra as a title, but there you go. Here we have plain dark red reels over a blue background and some dramatic Egyptian-style music as we play and all the tomb-raiding items you'd expect to see on the grid. Will our backpack be filled with artefacts or will our bankroll be having a terminal adventure here?

We have a straightforward 5x3 grid here with 25 fixed pay lines which we pay 25 coins to spin. The 5-of-a-kind pays are 32x bet for John Hunter, 7x Anubis, 6x Pistols, 5x Backpack and 4x for the four card values so all quite simple so far. A Queen Stacked Wild appears on all reels bar the first and a Pyramid scatter on the centre 3 reels but there is more than one feature to get here. Standard symbols are all single but we can see stacked Scarabs on the first 4 reels with cash overlays and a few interesting ways to collect their offerings.

So if one or more cash Scarab lands on the first 4 reels, you need a special symbol on reel 5 to land on the same spin to activate this money:

Collect - simply pays the total cash Scarabs in view.
Extra Collect - this reveals another bigger cash value to add as well as collecting.
Multiplier Collect - what it says, i.e. your cash is multiplied by the value revealed.
Expanding Collect - all reels in 1 to 4 showing cash Scarabs will expand to add more cash.
Respin Collect - the Scarabs are held and reels respin to add more before collecting.

Having landed the 3 Pyramids on the centre reels you get 8 free games which can retrigger. These are standard pays but during them any cash Scarabs landing are logged as a total. When the standard spins are over, a giant Scarab cash symbol will appear on reels 1 to 4 and 5 will respin. If you are lucky and get the Collect symbol, you win the lot.

Despite the plain looks here the graphics are bright and animations decent enough and we get a good 96.50% RTP to boot. The volatility isn't that high being medium at best and those cash Scarabs can be very useful when waiting a while for the elusive free spins to land. The Scarabs don't pay ridiculous small multiples of stake but often over 100x can be achieved with just 6 or 7 in view, often more than you'll see for your free spins round. You may be surprised what you can hunt down on this trip with ol' John..