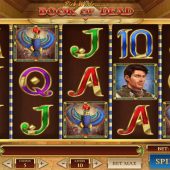 Book of Dead, or, to give it its full name, Rich Wilde and the Book of Dead is a high-volatility edition from Swedish developer Play'n Go. Usually with games such as this I would describe the pays and you may guess that it's copy of Novomatic's Book Of Ra Deluxe before I even mention that fact, but due to the title being so similar too, I think I can dispense with these niceties and get straight to the point! The theme is also the same, a Harrison Ford Raiders of The Lost Ark - type of idea with temples, treasures and mysteries of the ancient world.

We get the expected 10-lines on a grid of 5 reels and 3 rows with single symbols, all set in a background of a secret chamber in a tomb and naturally the Egyptian music as the reels spin. The Explorer, Rich Wilde, is the highest-paying 5-of-a-kind paying 500x stake. The surprises don't end there as we get 200x for the Gold Masks and 75x for both Horus and Ra the Sun God. To complete the match we have the card icons paying 15x and 10x bet for the 5.

By a staggering coincidence this game has Red and Gold Book Wilds on each reel which substitute as scatters too - land 3 or more to trigger 10 free games. When this occurs the pages of the Book will turn and reveal a random symbol aside from the Wild Book. This acts as an expanding scatter for the duration thus effectively giving all wins a 10x multiplier. You can retrigger them and just like its big brother from Novomatic this is not an infrequent occurrence.

Book of Dead slot has mechanics that are proven to be hugely popular amongst the slot-playing community. It is not unusual for developers to erm, 'pay tribute' to other slots but at least they make an effort to change the graphics in most cases! That said, we do have a slight difference from the Novoline version which allows Book of Dead to offer a superior RTP of 96.21% - this is the fact that in the free games you do get any winning combination on pay lines consisting of the chosen scatter symbol paying first before the scatter wins are counted. The similar looking Novomatic slot disqualifies these hence their lower RTP. So, will you take a chance that this book won't be dead for your next session?