John Hunter and The Secrets of Da Vinci’s Treasure slot 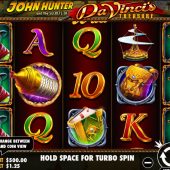 John Hunter and The Secrets of Da Vinci's Treasure slot has a familiar feel to many other adventure themed slots such as Play'n Go's popular title Rich Wilde's Book of Dead. Now that is actually a decent analogy because here we get (as with Book of Dead and Novo's Book Of Ra) an intrepid explorer in the same Harrison Ford 'Raiders of the Lost Ark' hat as our main character but here he meets Dan Brown's Da Vinci Code as we can see by the symbols. Dramatic adventure music plays as we spin the reels over an ancient treasure map which implies riches to be found - but at what cost to our bankroll?

We play on 25 paying lines with a standard grid of 3 rows and 5 reels with all symbols single except the explorer, John Hunter. He is the best pay at 32x bet for 5-of-a-kind and thus a full screen would award us 800x and we see four other picture icons of a Code Book and Backpack (both 20x) Sundial and Crossbow (both 12x) alongside six card values offering either 6 or 4x for a full line. Leonardo da Vinci himself appears on the single Wild and this only appears on the last four reels whereas the Codex Machine (straight out of Leander's 'Codex' slot?) appears on just the centre 3 reels as the game's scatter.

So we have landed 3 Codex scatters on the middle three reels and unfortunately the old bugbear of a game choosing your bonus from a selection (of which only one is any good) occurs here!

Prize picker - choose one of 3 items for a cash prize. Think the annoying Hitman slot pick symbols on reels 1, 2 and 3.

Map quest - 23 positions on a trail and spin a wheel with 1 to 5 and 'STOP' on it. Same as Rainbow Riches' Leprechaun Trail bonus where it'll only be decent if getting to the castle at the end for a better prize.

Progressive multiplier spins - the bonus you really want and taken from the now-disappeared Cleopatra 2 slot. You get 12 spins and the multiplier increases 1x every spin regardless of a win or not. Can retrigger up to 4 times giving an ultimate 60x multiplier and this is why the game proudly proclaims 'win up to 48,000x bet' when you open it up. A full screen of John Hunter at 800x multiplied 60x would pay just that - after you'd just won the lottery and 2 minutes later found a 700-carat uncut diamond while digging your vegetable plot in the back garden.

John Hunter and The Secrets of Da Vinci's Treasure slot is volatile and Pragmatic do tell you this in their game rules with good reason along with the overall RTP figure of 96.53%. The graphics and effects are better than average for a slot as is the music which fits the theme perfectly.

I don't know about you the reader, but it's apparent to me that some developers when designing slots with a potentially lucrative feature that due to it's nature would be infrequent, often create almost pointless low-potential ones alongside just so you can trigger them more often. Hitman for example has a high-potential assassination feature that means it cannot be triggered too often therefore we get the awful pick-me so the player thinks something's happening. Bonanza slot on the other hand is brutally honest; an high average return and very infrequent triggers and that's your lot, no stocking fillers! I think I prefer the latter but it's all down to personal preference I guess.

Having had a history of bankrolls being brutally beaten by slot characters wearing Harrison Ford-style 'Raider of the Lost Ark hats' I will exercise some caution with this game but then again, we all like an adventure...