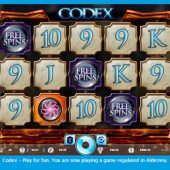 Codex slot may trigger memories of Dan Brown's 'Da Vinci Code' 2003 bestseller novel as the cylindrical Codex Wheel was a major part of that story, although it was called a 'Cryptex' in the book. We immediately see the workings of this ancient machine as a clever background to our reels and get some mysterious classical music as our soundtrack as we play. An impressive start, but can you crack this ancient puzzle to reveal the riches of the Codex?

We have 20 pay lines which is not unusual but the reel format is - we get 15 separate reveals for each icon on the 5x3 grid, the same as you may have experienced if seeing the bonus round on Novomatic's Captain Venture or Lord of The Ocean slots. You pay 20 coins for a spin and there are Wilds appearing on all positions except the left hand column, so they can effectively be single, double or triple stacked. The best icons are the Three Inventions - these are crystalline shapes in gold borders and the pink segment pays 50x bet for a 5-of-a-kind win, the blue pentagon 37.5x and the green pyramid 25x for the full 5.

There is an in-play feature called the 'Invention Combo' which means any winning line(s) are awarded a random 4, 5 or 6x multiplier should one or more of all 3 of the above Invention symbols appear on the grid when that win appears.

The remaining paying icons are the card values awarding 5 down to 2.5x bet for a full line. We do get a couple of bonus icons though!

A bonus icon appearing anywhere on both reels 2 and 4 triggers the Vault trail. You will see the Codex and its 5 revolving wheels and above there is a code. You spin the first reel of the Codex and if the symbol matches the first one of the fixed code you get cash and spin again. If the second tumbler also matches, your cash goes up. If it doesn't, you are allowed just one respin, but it will take most of your cash from the first winning Codex award! You can collect though at any time and if you were unlucky enough not to even get the first Codex right you get 5x bet and the game ends. Should you match all 5 Codex symbols and unlock the code with either buying one re-spin along the way, or being lucky and just getting them all stop right for you, 195x bet is yours.

This round is triggered by 3 or more of the named blue 'free spins' scatters. You get 7, 10 or 12 according to the number of scatters. This round can be very lucrative as the game randomly awards sticky Wilds and this time they can appear on the first column (reel) too. You can retrigger them and it's common to see whole reels filled quite quickly. The rules state you can fill all 15 positions and as that pays the same as the top icon you would get 1000x bet, repeated for every remaining spin if you were lucky enough to fill the grid with a few spins left! A touch of Netent's Dead or Alive bonus here.

Codex slot is original with its theme and graphics are superb, as are the animations. You won't find too many big hits in the base game, although sometimes it does reveal plenty of Wilds for a decent win. This doesn't matter too much as you find quite regularly the Invention Combo will appear when you have small wins and multiply them for you as described above. The free spins are exciting and usually lucrative and you have some serious potential, even if they are hard to trigger on occasion. The RTP is 95.01% and Spieldev have created a great game for the Leander platform here. Get your thinking caps on, Codex slot is one riddle you really should try and solve... 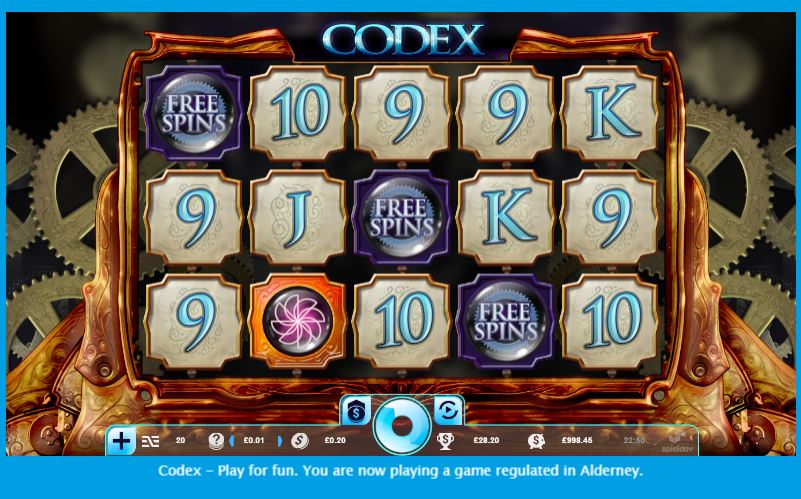