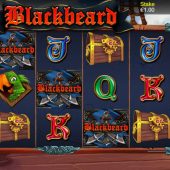 Blackbeard slot by Leander Games takes us into the world of piracy from the middle ages via this oft-used theme. Pirates seem to be the in thing recently with several games and varying degrees of playability. Yggdrasil gave us the decent enough Pirates' Plenty and then the awful Pirates Smuggler's Paradise and Red Tiger rolled out the terrible Piggy Pirates slot, so these games are quite hit-and-miss. In this instance we have the reels over a wooden deck, some jolly music as we spin (probably to avoid using the stale old sea shanty soundtrack) and some decent ones when certain wins appear. So can Blackbeard be stopped from plundering our bankroll here?

We get 20 lines on a standard grid consisting of 5 reels of 3 rows each on Blackbeard slot. the 5-of-a-kind pays are 25x for the game logo which can appear stacked, 20x Chest, 15x Skull or Parrot or Pistols and 10x for the three card values which oddly start at K and not A. Wild Doubloons can appear singly anywhere and scatters in the form of Pirates only on reels 1,3 and 5. Randomly on any spin you may see 3 Skull Ghosts appear over the grid and you pick one for a modifier such as Wilds or a win. There are also 3 bonus rounds here and this is where Blackbeard slot gets a little more interesting.

Having seen the 3 scatters land on the odd reels, you will be invited to pick one. You will be given one of three different spins bonuses:

Pirate Spins - start with 3 lives and the Ghost may try and take one, unless Blackbeard manages to shoot him. You get special Sticky Wilds in the form of a Piratess and the spins keep going until 3 lives are lost.

Sea Battle - keep spinning again here, but you've 4 enemy ships to face. A Blackbeard Wild awards an extra shot, a Pirate Wild then the enemies get a shot extra. If you sink up to 4 enemy ships each time the multiplier for the round increases by 1x so you could finish on 5x maximum. If Blackbeard is sunk, game over.

Super Spins - each bonus scatter will change to a super fully-expanded Wild and the reels spin once, giving you a guaranteed win. You may see the non-Wild reels spin again afterwards too, so randomly retriggering the Super Spin.

Blackbeard slot is quite a fun game and Leander haven't made it childish either, which I do appreciate. The RTP isn't the best at 95.01% but that shouldn't detract from an action packed slot which has been done quite well, with good animations and graphics. The bonus rounds can be either poor or very good, especially the Super Spins and the volatility isn't any more than medium as far as I can see with a maximum base game screen of 500x for all positions being filled with the logo. Random features don't necessarily occur when the Ghosts appear and it seems like Leander have borrowed quite a bit from the Blueprint 20-liners such as Ted. Your money shouldn't have to walk the plank for quite a while here...