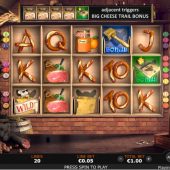 3 Blind Mice slot doesn't need a long explanation of the the theme as I'm sure you are familiar with the old nursery rhyme of that name. You are introduced to the game with a movie-quality cartoon and classical soundtrack of which I am also sure you can guess the tune of. The graphics and sound effects are also of high quality which should overcome your doubts about this theme being applied to a slot. So, like those poor mice, will this game have you on the run?

The reels are set in the display cabinet of a Victorian Bakery which forms a quite detailed background too. The 3 mice lurk to the left of each of the 3 rows of this game of 20 pay lines and 5 reels, for a very good reason as we shall see. Although a Victorian Bakery, for some reason the mice sport modern sun shades and gold clubs. Don't ask me...

The symbols are all nice things the mice would wish to scoff should you turn your back. A joint of ham is the best value pay at 25x bet for a 5-of-a-kind win followed by the orange preserve at half that, then we have the card values formed of bread offering a tasty 7.5 down to 2x stake for the 5. Unsurprisingly there is cheese about and this is the game's Wild but only when it lands next to a mouse on reel 1 - the mouse then turns it Wild on that row and the game re-spins. If you get another cheese added to this line the same thing occurs again and if you don't the cheese will vanish to reveal game symbol(s) underneath which may surprise you with another win.

You have 3 different bonus Wilds on reels 3, 4 and 5 which are feature triggers but you need Wilds in front of them to work, as we will see.

3 Blind Mice has an odd structure in that the main feature bonuses occur via one of the 6 random in-play pick features. You are offered 3 silver platters and lift the lid on one to reveal one of these:

Cheese Wilds - 2, 3 or 4 Cheese symbols on a horizontal line.

Win Rush modifier - Guaranteed line win with one symbol, which will then turn into the Rush symbol. The reels spin until no more are added then the win is paid, similar to the Jack Hammer slot from Netent.

The 3 bonuses on offer are as follows:

Farmers Wife Wild - keep the 2 preceding Wilds in place on reels 1 and 2 that were behind this feature symbol on reel 3. Reel 3 then has the Farmer's Wife appear and slash at the mice which turns reel 3 Wilds then you spin and wins are paid.

Whack-a-Mouse Bonus - you see a wooden board with holes from which the cheeky rodents pop up and you bash them with a steak hammer, earning either bet multipliers or extra whacks. You start with at least 3 whacks.

Big Cheese Trail - you embark on a Cheesy trail earning multipliers as you go. Get to the end and you get the Big Cheese Wheel with at least 100x bet for you!

3 Blind Mice slot, was one I initially groaned at due to the theme, but I can't deny the quality of the sounds and graphics and the variation of features and random events. Surprisingly, the Whack-a-Mouse and Cheese Trail can pay quite large wins and the base game has a high win frequency too plus a high 96.16% RTP. The animations are great and my doubts have now vanished as quick as that cheese when left unattended. It's fun and I now regard it as more 'Tom and Jerry' than a more juvenile theme like Play'n Go's Hugo or NetEnt's Red Riding Hood. I'm definitely going after those mice's tails...