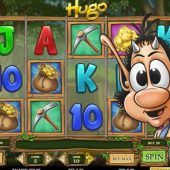 This slot Hugo by Swedish developer Play'n Go is based on a Danish cartoon troll which was inflicted upon young Scandinavians in the 1990's. Due to its popularity, Hugo was turned into a live animated video game that could be controlled by viewers who called in.  To think at the same time in the UK young people were subjected to 'Roland Rat' and 'Gorden the Gopher' doesn't bare thinking about. OK, enough of being a TV critic, the game matters more: does the troll roll?

Tap, tap, tap, Hugo is already winding me up!

In line with Play'n Go's remarkable propensity to irritate the player, straight away you will notice Hugo tapping the screen and shrieking some inanities if you don't press 'start' quick enough, making that sound you would get rapping your knuckles on an old CRT television - remember those?  The highest symbol is the gold nugget which pays 75x stake for 5-of-a-kind (5OAK) on this 10-line 5 reel 3-row game. Hugo himself is a doubling wild and would pay 200x stake for 5OAK.

You have as usual with Play'n Go slots 2 different features. In the first Hugo allows you to enter his dark subterranean world should you land 3 treasure chests on reels 1, 3, 5.  You choose doors for Hugo to enter, either left or right. You will get a cash prize and move to the next door unless the evil troll comes and bashes him. Now there is a hint on this sometimes - should you choose the evil door the door will wobble and give you a chance to retreat and choose the other one, a tell you will die if you proceed.  There are 4 doors and should you safely navigate them all you will enter a treasure room and be awarded with a large prize. I achieved this and got 240x stake the first time I got the pick-me feature!

3 lady scatters will trigger a free games round. You have a rather poor enhancement in that scatters appearing pay x stake. So you can choose 5 spins where each scatter pays 3x stake, 10 where they pay 2x stake and 20 where they pay 1x. There is a retrigger available, and the scatters can appear more than once on a reel too in stacked form. For some obscure reason the last free spin has gold-rimmed reels and this appears to mean nothing.

Hugo is not the first cartoon character to make it into a slot game. Other notable titles include Playtech's Pink Panther slot, IGT's Family Guy slot and NetEnt's South Park: Reel Chaos. Although the latter two are arguably cartoons aimed at adults. The free games round in Hugo slot is not particularly inspiring and the best feature is the pick-me, which is unusual on most slots. If you're not Scandinavian, so previously had no reason to hate little Hugo, this game may well change that through sheer irritation by the main troll character. This game is really for fans of Hugo who became familiar with him in their childhood - fortunately I didn't....

Just a footnote on the fact that this game is quite cartoon-like and has the potential to appeal to younger people. Pretty much all the reviewers here at Gamingslots believe we would really not miss much by removing cartoon-inspired slots. The negatives far outweigh the positives, regardless of how long ago the cartoon was on the TV.