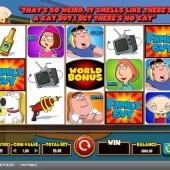 Slot game manufacturer IGT are known for their branded slots. A quick look at their portfolio reveals a number of tie-ins with movies and TV shows, such as Star Trek slot, Ghostbusters and Transformers – Battle for Cybertron. So when news came out in 2014 that there was going to be a Family Guy slot machine for land-based casinos, based on the cult adult cartoon show of the same name, it was little surprise.

The slot machine proved to be a big hit, so IGT decided to develop a Family Guy slot for online and mobile. Towards the end of 2015 Family Guy slot started to appear in online casinos in a slightly watered-down version of the popular slot machine – similar bonuses, similar features, just not so many of them. And that is the game I will be reviewing, having spent a good deal of time playing it over the past few weeks.

Love the show, love the game?

I am a big fan of Family Guy – the cartoon, so this wasn’t a hard sell on me. I may not watch it as often as I used to, but all the characters and the humor work really well on me. Therefore I went into this game with wide eyes and a big smile. All the family are represented on the reels, including Peter Griffin, Lois, Meg, Chris, Stewie and Bryan. There are also appearances from the likes of Quagmire, Cleveland, Joe and Ernie the Giant Chicken. All this was a real plus point for me and early signs were that this was going to be a real crowd pleaser. However, it didn't take long for a few things from the game to wipe the smile off my face. The constant Family Guy theme song playing over and over does get a bit tiresome. You can switch all sounds off, but there doesn’t seem to be a way to just switch off the background songs and keep the in-play sounds. This wasn’t the only problem with this game though as you will see in the bonus section below.

Bonus overload and not the good sort

So what do we know about branded slots? Well if we look at some of the most recent ones, which include NetEnt’s rock band-themed Guns N’ Roses or NextGen’s Hollywood-inspired James Dean, it’s that these games are jam-packed with bonus features. Most of these bonuses could be stripped out and replaced with one good bonus.

There is actually one good bonus feature in the Family Guy slot and that is the Lois’ Hot Free Spins bonus, which I will explain below with all the other features. The bonus features are triggered when you land 3 bonus symbols in the same spin on reels 2, 3 and 4. You then get taken away to spin a globe with Stewie to reveal which bonus you get:

Lois’ Hot Free Spins – As the name implies, this is a Free Spins bonus, but with a little twist. You get 10 free spins and as you play you collect hearts when they appear on reel 5 (Peter Griffin heart symbol). With every 3 hearts you collect you are awarded a new Lois wild symbol on reels 2, 3 and 4 (think IGT’s Kitty Glitter bonus and you are getting close). There is also a Quagmire retrigger on reel 3, which awards an extra 5 spins when it appears. For me this is the bonus with the most potential for a big win, but you need a lot of hearts and hopefully a few retriggers.

Chicken Fight Bonus – This one I seem to get a lot. Fight Ernie the big yellow chicken and collect multipliers and coin wins and you go through the rounds. There are three fighting rounds where you pick up prizes and typically you will win one round and lose two, it is however meant to be random.

The Drunken Clam Bonus – Slightly better than the Chicken Fight, The Drunken Club bonus puts you up against Quagmire, Joe and Cleveland in a drink off. As you top up your glasses, you get opportunities to increase your winnings. If you out-drink your buddies then you can also pick up multipliers. This bonus normally goes really well or really badly for me, but rarely in the middle.

There are also Griffin Family Features which can offer simple cash prizes or increase your chances of hitting the bonus feature more easily.

The first thing to say about the Family Guy slot is that it’s fun. If you are a fan of the TV show then you are likely to enjoy the good use of characters, as well as clips and catch phrases. However this alone is not enough to make Family Guy a great game. One of the major downsides to this slot is the bonus round overload, reminiscent of other branded slots. It appears that when developers enter into these partnerships with TV shows or movies that they absolutely load these slots with bonuses and features, presumably in a bid to keep short attention spans interested. For a more serious slot player this generally means one thing – low volatility, so chances of winning big are much smaller. Family Guy fits this mold, making it slightly disappointing in terms of gameplay. There are a few branded slots that do have a higher volatility such as Iron Man 3 and Fantastic Four, both from Playtech. The vast majority though offer smaller wins in exchange for lots and lots of features and Family Guy is no different unfortunately.