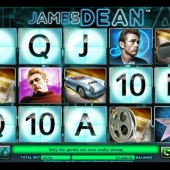 NextGen Gaming, a developer that has certainly raised its profile in more recent times, turned to Hollywood for inspiration in the 2015 slot release ‘James Dean’. Based on the actor who became a cultural icon for the disillusioned youth and the socially excluded as expressed in his best known film Rebel Without a Cause. The slot game focuses entirely on the film life of James Dean with moody images of the American icon, along with film reels, aviator shades, Hollywood star’s and of course the Triumph motorbike that was very much part of his life.

It was a brave move by NextGen to pick a character like James Dean for a slot game.  He is still adored today, despite dying in a fatal car accident in 1955. NextGen have made the slot game very upbeat with plenty of rock and roll audio, slick looking visuals and a focus on James Dean ‘the pinup’. One questionable decision in this slot is the choice of sound used for totalling your win. It sounds suspiciously similar to the same noise used in some Playtech slots.

There are three different bonus features in the James Dean slot and the Pick Bonus has the potential to be the most rewarding. If you see 3 James Dean symbols (red sweater) simultaneously on reels 2, 3 and 4 then you will trigger the Pick Bonus. You will be presented with 3 boxes to choose from which all contain a cash prize. You may get multiple picks and you can up to 150x during normal play. Trigger the Pick Bonus during the Free Game feature and you can win up to 300x and up to 750x during the Legend Spins – more about them later. As you can probably imagine, your chances of hitting this bonus in the Legend Spins is pretty small, but not impossible.

There is a Free Spins bonus in the James Dean slot which is activated by 3 or more Hollywood star scatters appear in view. This will automatically award 10 free spins with all wins doubled. During the free spins you can collect ‘Legend Spins’ when you see the clapper symbol. Each clapper will award a number of legend spins that are collected up and played at the end of the free spins. The great thing about the legend spins is all wins are multiplied by 5. Plus you also get the chance to win big if the Pick Bonus lands during these spins.

Don’t forget there is also a Re-spins feature in the James Dean slot which will activate with 3 James Dean Wild symbols (blue backround) appearing together on reels 2, 3 and 4. You will be awarded 3 re-spins with at least one of the 3 middle reels being wild.

If you are a fan of James Dean and you like slots then you are very likely to enjoy this NextGen slot. It has some nice features which keep it interesting and it’s packed full of music, sounds and special features. If James Dean was being awarded marks for being attractive then it would be 10/10. However, I can’t help feeling that slot fans will be more enthralled by other movie-inspired slots. Personally I am a big fan of Playtech’s Gladiator slot and I also like the classic Microgaming slot Tomb Raider. James Dean is definitely well worth spending a bit of time playing, so I encourage you to check it out. 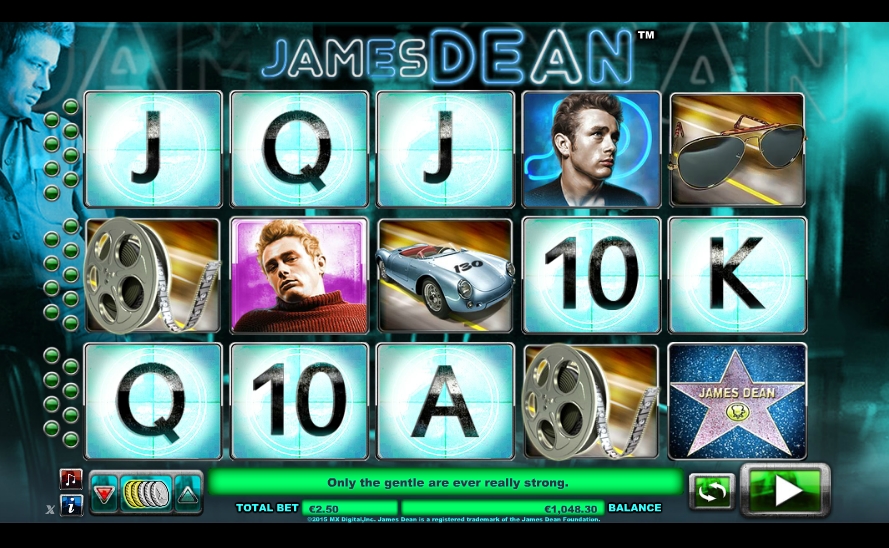