An Evening with Holly Madison slot 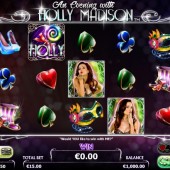 This slot is a 5 reel, 25 payline title from Australian-based developers NextGen Gaming offers us a glamorous insight into the world of the former showgirl and television personality. Symbols on the reels include playing cards, dice, a convertible car, pink top hat, masquerade mask, blue shoes, and the regular icons of a heart, spade, club, and diamond.

The Wild is represented by the Holly Madison image of her blowing a kiss. It can appear on reels 2, 3, and 4. They will substitute for all other symbols, except for the Scatters, to complete any potential winning combinations.

That's not all on the Wilds front! There is also a Holly Goes Wild feature and this is when a Wild appears on a reel as an Expanding Wild to trigger a win. The Wild will only expand if a win can be achieved from it expanding on that reel. If you hit three Wilds on the same reel then you will earn a larger win.

An Evening with Holly Madison might have the look and imagery of a female-orientated slot but I think its aimed at both females and males. The Expanding Wilds offer the chance for some decent-sized wins in the base game and the free spins bonus round with the added on Photoshoot Bonus is a great little feature to aim to trigger. The added fact that there is the Rockin' Re-Spin when you narrowly miss out on the free spins bonus round is also great to see. It follows in the footsteps of other celeb-fame-model-themed slots such as Playtech's Marilyn Monroe slot and IGT's She's a Rich Girl slot, although I am not convinced Holly quite has the clout of some of her predecessors.