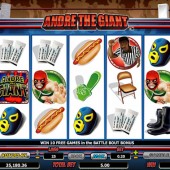 To some he'll be remembered as one of the all-time greats of WWF (or WWE for the new generation), up there with Hulk Hogan. To others, however, he'll always be Fezzik, the unusually tall giant from the classic 1987 film, The Princess Bride. This 5 reel, 25 pay-line video slot from NextGen Gaming celebrates the life of the French 7'4" wrestling behemoth in a slot named after him.

In Andre the Giant, there are plenty of icons of the sport, including refs, chairs, the ring itself, wrestlers' masks, title belts and ticket stubs, plus the great man himself. For wrestling fans, there's plenty here to sink your chops into - and we don't just mean Andre's impressive meat chop sideburns.

The gentle giant himself appears with arms crossed, and acts as the game's Wild. Appearing only on reels 2 and 4, Andre will expand across all reels in true gigantic fashion. He substitutes for all symbols other than the Scatter, which in this game is the game logo. Three or more of those triggers 10 free spins, but that's not all you win. During the free spins you can collect wrestling moves when appropriate icons appear on the fifth reel. After the free spins round you'll get to choose one of three opponents to face in the wrestling ring; simply choose which moves you want to pull and get a cash prize for every move you pull off.

Slot developer WMS Gaming actually have a Princess Bride slot if you hunt hard enough round the land-based casinos, so fans of Andre's film career - all one film of it - have alternative games to find if they want more of France's largest export. For wrestling fans, however, MX Gaming have a Hulk Hogan-themed slot, Hulkamania, which itself has a few exciting bonus arcade rounds where you can indulge your wildest beat down dreams. And while we're on the ringside tip, try out Fisticuffs, the old-school boxing video slot from leading developer, NetEnt.