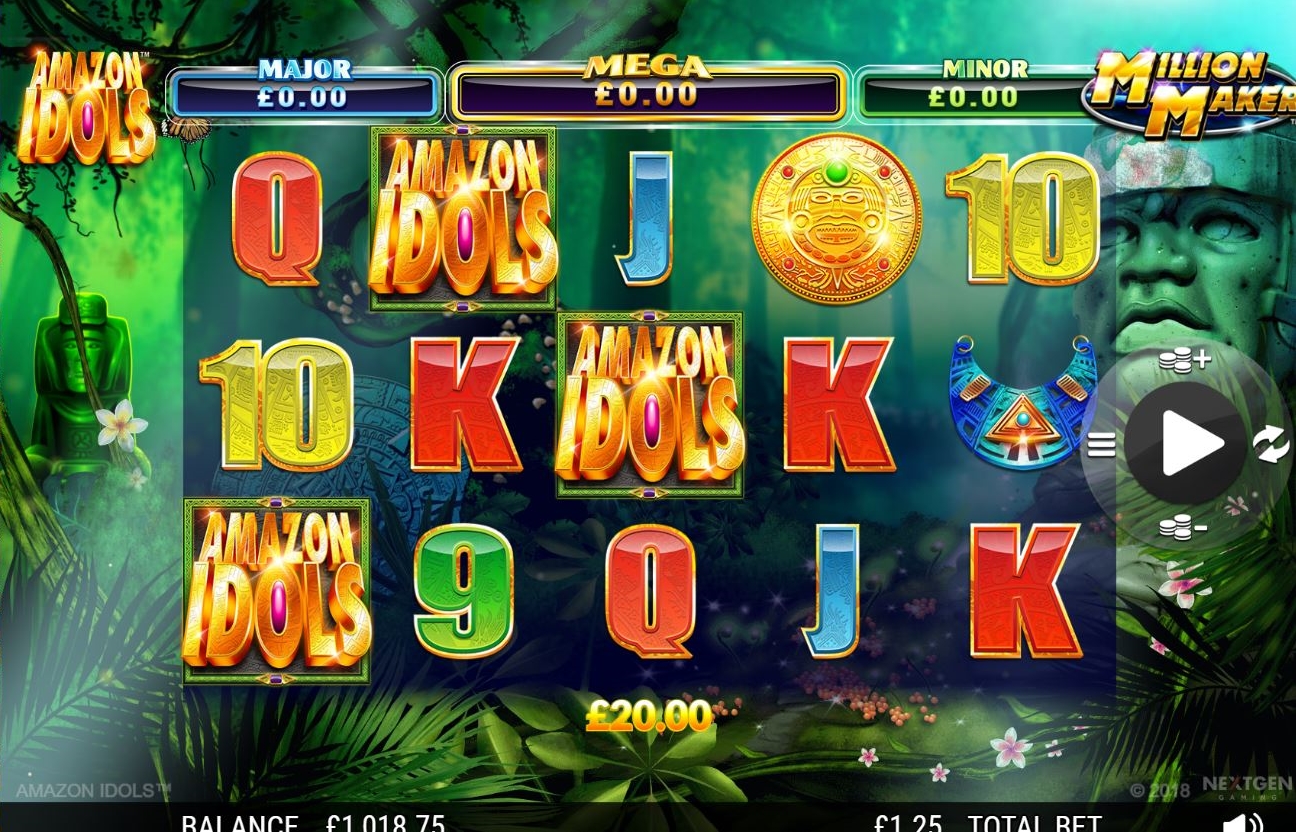 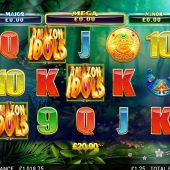 Amazon Idols Million Maker slot is one of the first to be released since Nextgen were absorbed into the ever-growing Scientific Gaming empire alongside WMS, Bally and Barcrest. Prior to this we saw Nextgen's first progressive slot of the modern era, Medusa 2 Jackpots and given the fact many of the SG companies have progressive slots I've a feeling Amazon Idols Million Maker won't be the last! At least we still see the nice Nextgen glossy graphics and we play with transparent reels over a scene you may expect for the theme - a jungle background with these mysterious statues either side of the reels along with a very gentle and soothing soundtrack. So can these Idols really be a 'Million Maker' or will we be naming it instead a 'Bankroll Breaker'?

On the reels...
A standard set of 5 reels and 3 rows gives us 25 fixed paying lines and the symbols are single. The stunning Amazon Woman is top pay at 40x bet if you're fortunate enough to hit a 5-of-a-kind win with her because she is also the slot's Wild symbol. The premium icons are the Sun Disc, Golden Statue and two different jewels awarding 20 down to 10x bet for a full line and as usual Nextgen give us the 6 card values all paying 4x for the same. Unlike many Nextgen games though, instead of having scatters only on the centre 3 reels like for example Cash Stampede, here we see them on all reels in the form of the game's title.

Jackpots in the Jungle?
We only need to see 3 scatters for the bonus which offers 3 different options. You are taken to a jungle scene and select from one of the three positions on the screen to reveal your bonus type. You have no choice in what the game awards you though, but all 3 of the possible features will give you a chance of one of the Mega, Major and Minor Network Progressives. These are seeded at 1000000, 7250 and 95 respectively and would obviously be in your local currency equivalent if available outside the UK.

Amazonia Free Games - you get 10 free games which can be retriggered, but here you do have a real choice yourself! You can pick from expanding Wilds on all reels, expanding Wilds on the centre 3 reels but with any wins getting a 2x multiplier or finally an expanding Wild on reel 3 which will award a 5x multiplier to any wins it creates. During these free games each reel has an overlay of a Jackpot Idol and see 3, 4 or 5 to win the respective progressives.

Wheel of Amazonia - spin a wheel to win up to 35x stake in bet multiples or a jackpot. During this feature you can land on 'spin again' which doubles the wheel's cash awards but you can only get the 'spin again' twice.

Grid of Amazonia - you see a grid of 20 tiles and get 10 picks. Each tile can award nothing or 1x to 5x bet. You may hit a Ruby which will zap another 5 positions awarding you all the prizes in them. You may also reveal Jackpot Idols of which 3, 4 or 5 collected will award the Minor, Major or Mega progressive respectively.

Our View...
Amazon Idols Million Maker slot isn't a bad game to play at all. The volatility is quite low so wins are frequent and the bonus quite easy to trigger which makes up somewhat for my pet hate on multi-feature slots, the lack of guaranteed free spins. The graphics and sounds aren't at all wearing and with the relatively low reseeding of 90 I can see the minor jackpot being quite commonly hit, as with Microgaming's Mega Moolah. On some games progressives can hack right into the slot's RTP but here we have a high 97.50% of which 5.78% funds all the 3 jackpot levels. It can be frustrating getting feature after feature without the good free spins bonus here being selected for you but the other bonuses tend to pay reasonable totals to be fair. The bottom line is that you could enter the jungle here and leave, quite literally, as a millionaire...