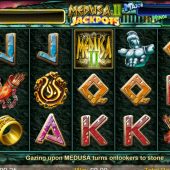 Medusa 2 Jackpots slot is revamp of Nextgen's classic high-variance Medusa 2 game, itself a spin off from the original Medusa - these games have proved highly popular over the last few years with great graphics and game mechanics along with big win potential. Now Medusa here is a beautiful woman but wasn't really so; she was a winged human female with living venomous snakes in place of hair and those looking at her face would turn to stone. Perseus beheaded her and placed her head in his shield as a weapon before gifting it to Athena, and we can only hope the Nextgen haven't the same fate in store for our playing balance!

Deep and haunting music makes for a superb soundtrack on this 243-way game and the reels are transparent, spinning over a stone background as we would expect. the icons too are steeped in mythology with Medusa herself appearing as a stacked Wild on all 5 reel, paying 20x bet for all 5 in a full way. The Snakes pay 16x, Gold Serpents 12x, Statue of Stone or Quiver of Arrows 8x and the Gold Ring 4x our 25-coin bet. Five card values all pay 2x for a full way and the game logo completes the set as our scatter of which 3 or more are required in view for the free games.

In-play random events do occur, and firstly the Soldier may appear on any spin and turn a reel into a Wild before the reels stop. There is also a hint not described in the rules but with which you may be familiar with on the first Medusa 2 - if a 5-of-a-kind win is going to appear, a ghostly invisible spirit will sweep across behind the reels from left to right leaving a slight disturbance in the air. Very creepy! Her final trick is the cloned or 'Locked Reels' feature on any spin whereby similar to games such as Twin Spin, 2 to 5 reels can spin together and land on the same icons, including scatters and Wilds.

When Medusa lets us see 3 scatters we are awarded 10 free spins. On all of these the Locked Reels feature occurs and as you may have guessed this can often lead to 3 more scatters appearing which will add 5 more free spins. This is where the potential on Medusa 2 lies, as a full screen of Wilds in all 5 reels are conjoined and land with them fully stacked awards a huge 4,860x bet and 4 reels of Wilds has been seen by many players before, so this isn't too unrealistic.

Medusa 2 Jackpots slot is very similar to the original Medusa 2 although some of the sound effects have been beefed up a bit, and it's refreshing that you can play this classic now with the chance of a Progressive. Medusa 2 will be in most players' top ten of high variance games and deservedly so with the random features, great graphics and my personal favourite, the haunting and superb soundtrack to the game. You get a good RTP, big hit potential and the free games aren't too hard to trigger either. Medusa may turn your gold into granite eventually, but you'll just have to avoid looking her in the eye...