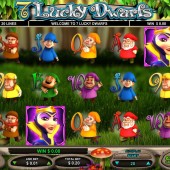 Fairytales are ripe for mining for slots developers after inspiration, and the Leander Games adaptation of the Snow White story, 7 Lucky Dwarfs, is the latest to hit online casinos.

Also ripe for mining are the jewel-stuffed caves our seven little heroes go off to explore – there’s even a jolly rendition of ‘Hi Ho Hi Ho’ over the top of the game as you play.

As for look, it’s as you’d expect from a slot that’s seen a few too many pantos in its time. A serene forest backdrop accompanies reels which are filled with plenty of dwarf icons – seven in all, of course. Here, they take up the 8-through-Ace poker symbols, Grumpy standing in for the 8, with Happy the King.

Snow White herself is the game’s Wild, and she substitutes for all other symbols. She also awards the game’s biggest jackpot, payout out 2,000x your line bet when you hit five across the reels.

Mirror, Mirror on the Wall, Who Has the Most Wilds of Them All?

There are a few neat little bonuses in the game, with Leander laying on the neat twists once again. First up is the “Mirror, Mirror” bonus feature, triggered when hitting mirror frames around reels 1, 4 and 5. When these land, the mirrors will ‘reflect’ the symbols shown down reel 2 and replicate them on reels 1, 4 and 5. For example, if reel 2 happened to have two Wilds and a high scoring symbol on it, those same two Wilds and one other would appear on the three other reels, meaning you’re in for some juicy payouts.

Three Bonus fairy house symbols on reels 1, 3 and 5 will trigger one of two bonus rounds – either the “Goodland Casino” free spins round or the “Dig Dig” feature.

The free spins rewards you with 5 spins to start off with, but if Snow White appears on the screen, she will freeze the free spins countdown. Also, at the end of the round you’ll get to pick one of the seven dwarfs to earn yourself a multiplier on your winnings, anything from 1x to 7x.

The second bonus game is a kind of trail feature. Spin the wheel and move your dwarf along the path the number of stones you’ve hit on the wheel. Keep going to see if you can reach the dwarf mine. Get there and you’ll earn a bonus cash prize.

Leander don’t really do same-old same-old slots, and 7 Lucky Dwarfs proves that. Fairytale themes do seem to lend themselves quite nicely to online slots, and anyone who’s played IGT’s Pixies of the Forest or Sheriff Gaming’s cracking fantasy-themed slot, Magical Forest, should find plenty to enjoy here.