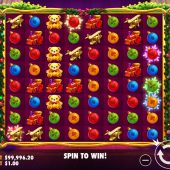 Santa's Wonderland slot by Pragmatic Play is as colourful as you would expect of a Christmas theme. The calming seasonal music, the toys and baubles complete a relaxing vista although it's pretty typical for this genre of game overall. We have clearly got a mix of the Play'n Go grid game formula as seen on Moon Princess slot and their latest version, Reactoonz 2 slot but on a bigger scale as with Red Tiger's Jack in a Pot slot. So can Santa deliver a gift-wrapped raise for our bankroll here or will we be wondering how it went so fast?

Modifiers
Expose a Snowflake on the grid and you get its modifier and more than one can be earned in a play.
Refresh - Blue Snowflake, after wins stop the grid is cleared except for Wilds and new symbols tumble in.
Wild Santa - Purple, after wins stop all instances of one chosen symbol are changed to Wilds.
Blocks - Yellow, blocks of 2x2 symbols are added randomly.
Supersize - Red, a random 3x3, 4x4 or 5x5 colossal block symbol is added.
Lucky Santa - Green, 5-15 Wild tiles added after wins stop.

Our View...
Santa's Wonderland slot is volatile with a 96.23% RTP. As I said, it's a mish-mash of the Pragmatic levels mechanic alongside Play'n Go's progressive modifiers grid-based games. It's good on the eyes and ears but is frustrating falling short of the Midnight feature by a few tiles repeatedly. That said, the feature can pay well and is entertaining to observe and you can also hit some decent amounts via the base game Snowflake modifiers. Nothing really to see here when all's said and done, I cannot consider it anything but yet another stocking filler Christmas slot...