Jack in a Pot slot

Free Jack in a Pot slot

Jack in a Pot slot review 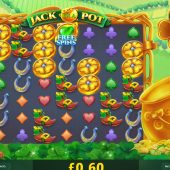 Jack in a Pot slot alas uses the stale and too-often used Irish theme and stereotypical symbols that to me at least seem to remove any sense of uniqueness about a game when I see them. To be fair, Red Tiger have only used it once or twice before, with Rainbow Jackpots being the last and Blueprint's Irish Riches has applied the theme to Big Time Gaming's Megaways license as well. This game needs to impress to get past the mediocre appearance and we have a grid sitting over a field of shamrocks with a golden pot to the right which no doubt conceals some kind of annoying leprechaun and no Irish theme would be complete without the obligatory jaunty pipe and fiddle music. The question is, will riches appear from the golden pot or will our bankroll ultimately end up in there?

You do get scatters and Wilds and the Wilds get the Leprechaun really excited as we'll see.

A Wild can appear in any position and there are 4 different types which make the Leprechaun appear from his golden pot but only if they are part of a winning cluster.

Rainbow Swaps Wild - a giant rainbow appears over the grid and swaps symbols for bigger wins.
Beer Reels Wild - a tap is created above each reel by the Leprechaun and it will shower beer down which will reveal none to 7 symbols of the same type.
Magic Pipe Wild - Jack blows his pipe and creates one or two giant symbols of anything from 2x2 to 3x4 or more.
Hat Trick Wild - Jack removes his hat which sucks the low-paying icons from the grid.

You need to collect 4 or more Shamrock Spins icons to trigger 8 or more free games. No retriggers here or enhancements but when they've finished any of the special Wilds that have appeared will be saved and all played in turn on one final grid. This where you'll most likely see any substantial pays, but they aren't easy to trigger!

Jack In A Pot slot is pretty mediocre in all senses aside from the 96.06% RTP. There is nothing exciting in any of the animations, sound effects or graphics and this also applies to the base game where decent wins are hard to come by and then only usually via one of the infrequent Wilds appearing in a win. Free games are hard to trigger too and play exactly the same as base game spins so really it's all about the final Wilds spin as described above and if you haven't collected many that's doomed from the outset. It's excruciating to watch successive cascades of tiny micro wins too unless you set it in turbo mode. As far as I am concerned, Jack can blimmin' well stay in his pot - forever...