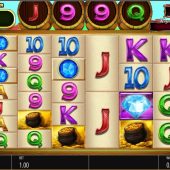 Irish Riches slot (MEGAWAYS) will leave you in no doubt as to its origins as soon as you open the game, unless you are one of the few slot players never to have heard of, or seen Big Time Gaming's Bonanza. In fact this is the second version to be offered by Blueprint as they first released Diamond Mine under license from BTG not long before and fortunately (or not!) there are a couple of differences in this otherwise formulaic game.

With the word 'Irish' in the title you need no telling as to the soundtrack for your play, what else but the generic fiddle and pipes Celtic-style music! although to many this will be more bearable than the inane banjo twanging that accompanies the two versions above. Perhaps more surprisingly there's not a leprechaun in sight, nor a clover or pint of Guinness but is there a pot of gold to be had from these Irish Riches?

The game has the standard variable-row reels for this Megaways format, with reels 1 and 6 offering 2 to 7 positions and the centre four reels 2 to 6 positions with a random row of 4 tiles above them. Those four positions above the centre reels are the only places you can see a Wild here but no scatters as they only appear on the main reels.

Each spin differs as there are between 324 and 117,649 ways possible depending on the rows each reel lands on any spin. Icons are stacked in varying amounts too with Gold Pots paying 50x bet for a full 6-of-a-kind, Rubies 7.5x down to 9's at 0.6x. Gold Pots also pay 2x bet for just 2OAK whereas the other symbols require 3 from left-to-right. Winning symbols disappear and are replaced by more cascading from above so several wins are possible during any play.

With incredible invention Blueprint have simply taken the highest-paying Diamond symbol and Gold Pots scatter from Diamond Mine slot and reversed them for Irish Riches so we need to find 4 or more Diamonds to trigger the 12 free games which have an increasing multiplier for every winning action. If you get 5 scatters up to the maximum of 8 you get 5 extra spins for each and thus can start with 17, 22, 27 or even 32 spins. During the free games 3 or 4 diamonds appearing in the top 4 random symbol positions above the centre reels will add 5 or 10 extra spins respectively. There is no limit to the multiplier and wins of many thousands times stake are possible here!

There is also a random mystery rainbow symbol which can appear on one or more positions on any amount of reels, which will all reveal the same symbol except scatters and may or may not add to any winning ways, or create winning ways from a losing spin. This is similar to Diamond Mine's TNT Barrels.

This game has had the Blueprint Jackpot King network progressive added and can be randomly triggered on any spin, where the reels spin with either blanks or Jackpot Crowns to award cash multipliers and hopefully the Jackpot Wheel.

Irish Riches Megaways slot is virtually the same as Diamond Mine but with the Jackpot King added, although this slightly reduces the actual game RTP by 0.50% to 95.93% as a result. The Megaways mechanic is a proven success and hugely popular and despite the small RTP reduction I would play this game before the other every time, for two reasons: firstly, the graphics are infinitely better as here we get the same easily distinguishable coloured gems and card values as Bonanza slot has which means you can follow the cascades easily (on Diamond Mine the symbols are a mess!) and secondly the music is tolerable for more than 15 seconds. I only hope that Blueprint don't flog the mechanic to death as they have with numerous cloned slots such as Ted and King Kong Cash - two is enough! So I can say with certainty my Blueprint Megaways destination will not be America from now on, but the Emerald Isle...