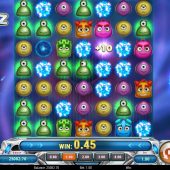 Reactoonz 2 slot by Play'n Go you would expect to be an improvement of the original Reactoonz Slot and that's what we will discover soon. Play'n Go do like this kind of grid model with enhancements in play as you'll no doubt have seen on games like Moon Princess slot or previous to that edition, Energoonz slot which is more similar to this one. A blue background, zany cartoon symbols and silly zaps and blips make our scene here as we expected, so how will our bankroll react to these 'toonz' here?

We have a 7x7 grid where winning tiles fall down to be replaced from above and pay for adjacent clusters of 5 or more symbols on Reactoonz 2 slot. There are 8 Toonz symbols which pay for clusters of 15+ 500x down to 3x and for the minimum cluster of 5, 1x down to 0.1x. There are enhancement symbols such as Wilds, symbol removers and so-on which all appear progressively as your winning symbol count on any single play reaches certain thresholds.

Fluctometer - one of the 4 low symbols is chosen randomly each spin and should you reach 11 on the Fluctometer, you get 1,2 or 3 Electric Wilds.
Quantumeter - Non-Wild symbols removed by the Fluctometer's Electric Wilds charge this up. It has 4 levels up to 135 and you need 55 for level 1 modifier, 85 for 2, 110 for 3 and 135 for 4. Level 1 releases 4 single Energoon Wilds to the grid, level 2 a single 2x2 Wild, level 3 a single Gargantoon 3x3 Wild. When this is paid, it then goes to two 2x2 Gargantoon Wilds, when these are used nine single Wilds. Level 4 simply adds a 2x multiplier to all wins, but only one of them can multiply for each winning cluster.
Wild Pair Explosion - if two or more Electric Wilds remain on the grid when all is done, if adjacent they will replace the whole grid except themselves, if not will remove symbols between them and any symbols adjacent to those. They don't pay the removed symbols but do charge the Quantumeter.
Uncharged Wilds - these can appear anywhere on the grid in any cascade but don't form wins unless adjacent to winning symbols in which case they trigger a Wild Pair Explosion.
Basically, the big wins here rely on series of winning clusters which trigger modifiers, which then produce more wins that continue to charge meters and so-on.

Reactoonz 2 slot is colourful nonsense which can spew out wins of 1-2000x bet although wins anywhere near the Play'n Go 5,000x claim are very, very rare. The RTP is 96.20% and the base game does produce some decent hits in its own right but anything substantial needs you to fill that Quantumeter fully when you then trigger a lengthy sequence of wins which can stack up very nicely! Yes, we've seen it all before from Play'n Go, but players love or hate this kind of game so who I am I to argue?