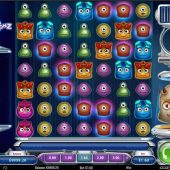 Reactoonz slot is another Play'n Go edition in their cascade grid format, to accompany old classics like Gemix and newer ones such as Cloud Quest, Viking Runecraft and Moon Princess. It appears the large wins those games can award will be scarce here, and the mood is set in display mode by a cartoon character snoring loudly, something which I found it difficult not to emulate after 10 minutes or so. The theme is typical Swedish juvenile symbols, in this case one-eyed and two-eyed 'aliens' and inane robotic noises and sound effects compound the initial dismay at the appearance of the game. So ignoring the silly aesthetic side of things, how will our bankroll react to Reactoonz?

As with theose cascade games mentioned above, you play on a grid, in this case a 7x7 one which fills with individual symbols from above. Any 5 or more connected adjacently horizontally and/or vertically will pay an award which is counted up in the Reactoonz chamber on the left. You only need 20 coins to play and most wins are tiny unless hitting larger blocks. The pays times stake are best demonstrated by the minimum for blocks of 5 and the maximum for blocks of 15 or more:

Any winning shape will also leave a 2x2 block itself on the grid with a 2x multiplier on it (called a Giantoonz) to increase the chance of a repeat win as only one further symbol of the same type needs to touch it on the next cascade for another win.

Wilds can appear left behind as described just now or you may randomly see the three-eyed thing on the right of the grid go into 'Instability Mode' and throw 4 to 8 onto the grid after any non-winning play. You can't get 'natural' Wilds in the game.

This is a gargantuan Wild but before we get to see this we need to get through the 4 different cumulative features which occur in the base game's successive cascades. Every 25 symbols that disappear in winning combos during a cascade will trigger a 'Quantum Leap' one of 4 single-hit enhancements:

Implosion - transforms 3 to 6 random symbols into Wilds and destroys their surrounding symbols.

Incision - puts a Wild in centre position of the grid and then an 'X' corner-to-corner becomes a random similar icon.

You will see these 4 features on a meter on the top right of the screen and any you've accumulated will trigger in turn when your cascade ends in a non-winning combination. This should mean your cascade continues and if it does and reaches the 5th. bar then you get the top Gargantoon Bonus. This will drop a giant 3x3 Wild onto the grid randomly and award the pays. After this, it breaks up into two 2x2 Wilds which are added thus guaranteeing another win. The final part of this sequence then occurs, and now your two 2x2 Wilds become 9 individual Wilds randomly placed on the grid. This is where you are most likely to see the Reactoonz slot's largest pays which you need blocks of 15+ icons to get!

Reactoonz slot has no doubt had some significant work put into it and the graphics and animations are decent if you forget the ludicrous theme and inane sounds. The RTP is a creditable 96.51% and there is some potential for 4-figure pay outs especially in the later stages of the cumulative enhancements when the Gargantoon Wilds are triggered. The main issue is the numerous plays where you see five or six successive cascades and then when they end you have a fraction of a credit due to the tiny wins for blocks of the lower-value icons. If you like this game format I'd recommend you stick with Moon Princess or Viking Runecraft as I didn't react favourably to Reactoonz...