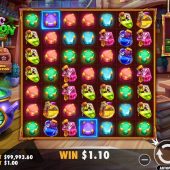 The Magic Cauldron Enchanted Brew slot by Pragmatic Play is a rare excursion into the grid-based format for this developer. The theme is crystals and potions so nothing new there, with a ramshackle wizard's or witch's kitchen behind the grid. Cartoon haunted creepy music is our soundtrack with the noises and effects befitting this common theme. WMS's Perfect Potions Megaways slot is the most recent game using this exact same theme, but hitherto there have been numerous including Leander's daft Potion Factory slot and Nextgen's less inane Potion Commotion slot. So can we cook up some magic for our bankroll here or will this cauldron be full of frogs and slime?

We have a 7x7 grid with individual cascading tiles on The Magic Cauldron slot with pays rated for adjacent winning clusters of 5 to 15+ symbols which are replaced from above. The pays for 15+ or the lower end of 5 tiles are Gold Potion 500/1x bet, Pink 200/0.7x, Blue 100/0.5x, Green 50/0.4x with Purple, Green, Red and Blue Crystals from 10/0.15x down to 2/0.1x. A Spell Book Wild can appear anywhere via one of the two cumulative triggers as can a Unicorn Wild via its own trigger. No scatters occur as a result of the cumulative set-up.

For each 25 winning tiles removed, you will earn a modifier from those below, more than one for every 25 collected if say 50 or 75 tiles are used.
Befuddlement - after triggering tumbles finish, transforms all Potion symbols in to Crystal symbols.
Invisibrew - this removes all Crystal symbols and replaces them from above.
Enlarging Ale - a randomly-placed 3x3 or 4x4 symbol is added to the grid.
Balm of Transfiguration - one random Crystal symbol will be transformed into a random Potion symbol wherever occurring on the grid.

Elixir Wilds - after a losing spin, 4-8 Wild symbols can be added in random positions.
Moon Seed Mark - Every spin, a Blue Mark can appear behind all instances of one low-pay Crystal tile and any tumbling down will also get the Mark. Once you win with any 5+ cluster of the Mark symbol, 2 Wild symbols are left somewhere in those winning positions. This modifier is active during all base game and other modifier spins.

Should you collect 125+ winning tiles, usually after the above modifiers have played out, one of these two is awarded at random:
Potion of Darkness - all low value Crystal symbols are removed, replaced from above but with only high-value Potion symbols.
Unicorn Wilds - 3 or 4 of these are placed on the grid with multipliers of either 1 or 2x. Each time they are involved in a win, they will increase 1x and are additive if more than one is used and can reach a maximum of 20x each. If this feature starts with no win, the screen will be reloaded to ensure a win sequence is started.

To be honest, games like The Magic Cauldron Enchanted Brew slot are all too common nowadays. Most developers have versions, they all seemed to be based on the Play'n Go ones like Reactoonz slot with the same cumulative triggers. You get a good 96.44% RTP here but are capped at 5,000x bet but I wouldn't worry about that as Play'n Go do the same and you never see wins even half of that. The theme is slightly juvenile and the sounds grate very quickly too. Most modifiers won't win you much as it's all about triggering the main events after 125 winning tiles in a spin. This is where the potential lies in the final climactic cascades, yeah we've seen it all before. No magic to see here, make this one cauldron that doesn't ever cook your cash...