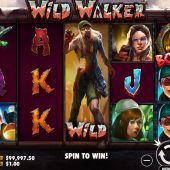 Wild Walker slot by Pragmatic Play is based on a horror theme similar to the film 28 Days Later where the living dead seem to have taken over the streets. We have urgent music here with a flaming post apocalyptic street behind the reels and no doubt the heroes and zombies on the reels. Think Leander's Zombie Rush slot or you've more likely played the pathetic Zombie Hoard from Microgaming, but the only game I think comes close here is Novomatic's From Dusk Til Dawn slot. So can our bankroll walk away with a profit here or will it be a case of don't walk, but run?

There are 25 pay lines on this volatile Wild Walker slot of 5 reels and 3 rows with symbols stacked. You do get a walking Wild reel in the form of a zombie which moves between each spin. Characters pay from 20 down to 8x for 5-of-a-kind with Gun 4.8x, Tubes 3x and four card values all at 1.2x. You will see pays though of 400x for the top Goggle Man as you can get 6, 7 or 8OAK wins in the free games! The Skull bonus scatter can appear on all reels but only 4 are possible as the Wild reel always takes one up. No random modifiers, so straight on to the very volatile bonus.

Wild Walker slot has a RTP of 96.55% and big potential but Pragamtic tell us it's very volatile. The sounds and effects are good, the graphics too although the loud noises surrounding the Wild reel each spin become tiresome after a short while. The pays here are all about the bonus and it will strip your balance fast when not appearing on a regular basis. The free spins can be frustrating to watch as they tend to fall short of unlocking the latter 2 stages which are where all the potential lies. I am not Wild about this game at all and I walked away quite quickly...