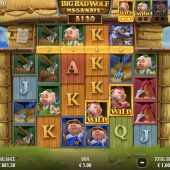 Big Bad Wolf Megaways slot by Quickspin is their first foray into the now ubiquitous BTG mechanic. They use an old children's book theme Big Bad Wolf which they used on an older slot and it's Big Bad Wolf Christmas Special so we have childish music, symbols and sound effects alas. The Swedes seem to like these old fairy tales as we saw with both Netent's Fairy Tale Legends - Red Riding Hood slot and the far superior Queen of Wonderland Megaways slot from iSoftBet, although we can't blame the Swedes for that one! So can our bankroll escape the fate of the little pigs or will be it be blown down like their house?

On the reels..
There are 6 reels with a top scroll of 4 tiles and 2-7 rows on each therefore 324-117649 ways to win here on Big Bad Wolf Megaways slot. Winning symbols are replaced from above in tumbles and your symbols pays for 6-of-a-kind are the Wolf 50x bet, Red Pig 6x, Green 5x, Blue 4x, Trowel 2.4x, Axe 1.2x, Fork 1x with six card values of 0.5 or 0.4x for each full way. Wilds can appear on the top scroll only, normal Wilds that is. Moon scatters appear on all reels including the top scroll and there's no random modifier as such but we do get a possibility of extra Wilds.

Wild Pigs
Above the reels to the right you will see the 3 coloured Pigs and a 2-dot meter by each. Every 2 tumbles within the same game will fill the meters in order of Red, Green and finally Blue Pig. So 2 tumbles turns all Red Pigs in view on reels 2-5 Wild, 4 then transforms any Green Pigs and finally 6 or more will convert Blue Pigs into Wilds.

Blow The House Down Bonus
If you are lucky enough to land 3 Moon scatters 11 free games are awarded. You still get the Wild pigs but now also an increasing multiplier of 1x for each winning tumble. To make things more exciting, collecting Moon scatters will move you from the wooden house to the brick house via the extra multipliers displayed over the left of the grid. Collect 3 to add 5x to the multiplier plus earn 3 extra spins and proceed to the brick house, 6 Moons for adding another 10x to your multiplier and another +3 spins. Thereafter, you simply get +1 spin for each Moon scatter appearing. It is quite hard to collect 6 though! The potential here we are told is 30,540x on the default 96.05% RTP, 26,252x on the 94% version and lower again for other versions which can be as low as 90%. In some jurisdictions you can buy the bonus for 90x bet which raises your RTP to 96.44%.

Our View...
Big Bad Wolf Megaways slot is made in keeping with the fixed line original so Quickspin have played it safe here. There are some positives despite the inane theme and sound track we have here though. The base game can initiate some quite big wins on occasions via the Piggy Wilds meters although it can be frustrating to see the first colour disappear in a win before the next one is triggered. The free games don't usually pay that much as it's difficult to collect the 6 Moons during them but if you do this early and trigger the Piggy Wilds a few times thereafter, you have a chance of some huge win totals. A lot of huff and puff here may just blow some good things in your direction...