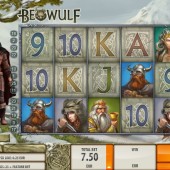 Beowulf was initially discovered as an Old English poem and is believed to be the longest of its kind at over 3,180 lines long. Historians believe it was written at some point between the 8th and 11th century. It tells the story of a Scandinavian man called Beowulf, hero of the Geats, who comes to the rescue of the Danish King, Hrothgar, whose land is under attack from a monster named Grendel. This tale was turned into a computer-animated movie in 2007 starring Ray Winstone, Robin Wright, and Sir Anthony Hopkins.

This Beowulf slot is a 5 reel, 25 payline title that was created by the developers at Quickspin. It isn't a branded slot based on the movie hit but it appears that the slot takes a lot of visual inspiration from the movie based on the graphics presented on the reels.

There are a wealth of symbols across the reels including King Hrothgar, his wife, Wigalf, Queen Wealtheow, and the evil monster Grendel. There are also the regular 9-through-to-Ace symbols that fill up the remaining positions. Beowulf is present just not on the reels, he's present on the side of the reels.

Look Out for the Golden Horn Wild

The regular Wild symbol is represented by the golden horn. It acts as a substitute for all other symbols, except the Free Spins Bonus, Sword Bonus, and Dragon Bonus, to complete any potential winning combinations on the reels.

It is perhaps most appropriate to cover the randomly triggered Grendel Attack feature first. This feature awards a random number of Wild symbols that will lock in position for a set number of re-spins. The number of re-spins awarded is determined by how many Grendel symbols are present on the reels when the feature is randomly triggered. Grendel might be the evil monster in the Beowulf story but you won't be able to get enough of it on this slot.

Trigger Free Spins with up to a 20x Multiplier

Beowulf is a slot that can be quite hard to get to grips with if you're not familiar with free spins bonus rounds that introduce additional Wilds and rules. The feel of the game is similar to the fiery Dragon Slot by Leander Games. Personally, I love the story of Beowulf and Quickspin have produced a fair translation of it onto the slots platform. It could be easier to understand but with enough game time you will get used to it. You will hit some decent wins whilst you're at it.