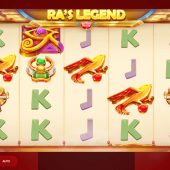 Ra's Legend slot has the famous Egyptian Sun God shining down his benevolence upon us as we play here - when he decides to, as we will discover. The game opens rather spectacularly as stone doors at the front of an ornately pillared temple open to expose the reels filled with Egyptian symbols and artifacts. Unlike IGT for example, with various Egyptian-themed games such as Cleopatra Plus and the classic Crown of Egypt slot, Red Tiger don't usually focus too much on this rather common subject among slots so can Ra's Legend light up your day, or more importantly your bankroll?

Now we've been let into the temple we see 5 reels and 4 rows on which sit 40 pay lines. The reels spin with a faint ticking and a very brief burst of music when they stop and the first observation is that we don't see Wilds as they turn - only Ra can give these in the first of his random features. The icons are stacked and the precious gold Egyptian items offer the best pays with the Eye Of Horus top at 30x bet for 5-of-a-kind. The other golden icons are the Bird, Sun and Ankh paying 12, 9 and 6x bet for the 5 and the remaining ones are card values giving 1.6 to 3x stake for a full line.

As with most Red Tiger games such as Rainbow Jackpots and Lion Dance we are treated to regular random in-play events. Here the reels will darken and Ra will light any 1 to 5 of them up with his rays of light and either those reel(s) will become solely filled with the gold premium symbols or will become Sacred Wilds filling the whole reel. These Wild(s) will be allocated a number from 1 to 8 and they shall remain in place for that amount of spins. Ra may also appear in person and offer you 'The Gift of Ra' holding a blue or red Sun of which one is is a cash award up to a maximum of 1000x (the game's top award) or one of the two triggered bonuses:

If you can't get Ra to give this randomly you may land 3 wheel icons on reels 1, 3 and 5. You get to see a Sun Wheel with amounts from 5 to 388x bet on it and spin it for the prize which then fills in green once awarded. Ra may then appear again and let you have another spin but if you land on any position filled in green you end the round.

Should you see this symbol appear 3 times in view or Ra grants the feature randomly via 'Gift of Ra' you are faced with a Golden Pyramid. The game is similar to the features in IGT's 100000 Pyramid and 50000 Pyramid whereby you choose blocks starting at the base of Ra's Golden Pyramid. You may see a cash value, an upwards arrow to the next level or a cash value with 'collect'. You keep selecting hoping to accumulate cash and rising up the pyramid. Get to the top and near to the sun and 800x bet is your reward!

Ra's Legend slot has all the attributes we associate with Red Tiger games - random features and often too, interesting bonus rounds and the potential for large wins. The graphics and animations are up to the usual high standards as is the game's RTP of 95.02%. Ra though doesn't relinquish his grip on the gold very easily and those bigger wins are quite rare both on the base game reels and in the features. The low win frequency means you do rely on Ra's random interventions for any action which can be frustrating seeing all those stacked symbols never seeming to line up without him. Ra may be the Sun God but his Legend is definitely more a case of 'sunshine with the occasional shower'... 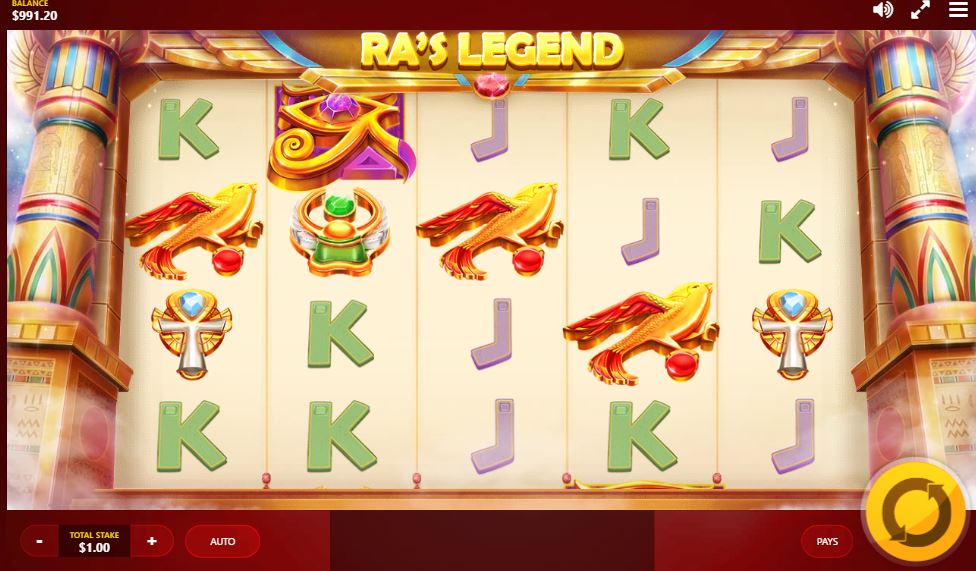