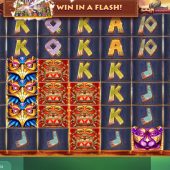 Totem Lightning Power Reels slot is a rather odd game for several reasons and that's not just because of the general appearance and large grid it offers. Instead of Red Tiger's usual Oriental style we have a Native American theme. You will hear the tribal drums, along with some mystic random events commonly associated with the indigenous people of North America. You may have played the original 'Totem Lightning' version too and have your own opinion about whether this 'Power Reels' edition is an improvement.

The reels sit over a rustic setting with the wild winds of the plains as our background soundtrack, with tribal music when spinning and Red Tiger's trademark springing noise when pressing the play button. Pretty straightforward so far, but are these Indians offering us the peace pipe or is our bankroll in for a scalping?

The set-up here is very basic with stacked symbols on frankly a ridiculously large grid of 8 reels with 6 rows each. I say 'ridiculously' because you'd expect some sort of multi-way slot based on the appearance, but we only have 30 paying lines whereas the original had 40 on a smaller grid. I did say that it was odd! The reels spin and any wins have their tiles removed and more will cascade down from above to replace them, as with slots such as Bonanza and Extra Chilli.

The symbols are simple enough with coloured Totem carvings representing wildlife as the four best pays. You can get up to 8-of-a-kind here and for that the Eagle awards 100x bet, Cougar 75x, Prairie Dog 60x and the Crab 45x. The remainder are five card values from Ace down to 10 paying 5 down to 1x respectively. There are no Wilds or scatters which tells us that any excitement here will be by means of in-play random events.

You will see a piece of hide on the right of the reels which displays the card values Ace through 10. Any win appearing which consists of one will pay and then all tiles with that value on are removed regardless of them appearing in the win. The reels cascade and any new wins are paid and if these are of one of the remaining card values that will disappear from the reels too. The objective is to leave just the four picture icons on the reels for bigger wins.

To assist you in this, you may hear a rumble of thunder then lightning will then emanate from behind this scroll of hide and can perform one of two tasks - firstly the lightning may remove all of a lower-paying symbol and then the reels cascade again or secondly it will light up any number of tiles and transform them into another one. This often happens more than once and is usually how all the lower card values will disappear from the grid leaving only the premium 4 icons. According to Red Tiger if this all goes as well as the Big Chief can possibly do, you could win up to 7,777x bet!

Totem Lightning Power Reels is certainly eye-catching in appearance if a little unspectacular otherwise. The format of the game means many consecutive dead spins which could put some players off and to that end you often see a series of Totem Lightning with little or no wins created. The RTP is a reasonable 96.03% and there is certainly potential for some huge hits in the pay tables but having tested this for a long period of spins I would suggest you'd be extremely fortunate to see one. The game to me is a sheep in wolves clothing and I really can't envisage me dancing around this totem pole again...