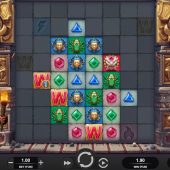 Cluster Tumble slot by Relax Gaming joins a few other grid games they've made which are usually quite popular among the players. Adventure music greets us when we open the game up with a gold bedecked temple as the background and stone blocks as the tiles our lady explorer needs to reveal. Kluster Krystals was an older version using BTG's Megaclusters mechanic but Temple Tumble Megaways used the other BTG mechanic so Magnetz slot is really the one game which is Relax Gaming's own creation. Until now. So can we cluster a few wins for our bankroll here or will it tumble down and down?

On the grid...
There is an 8x8 grid on Cluster Tumble slot with most tiles blocked but we can unlock those as we go. You need 4+ adjacent tiles for a win and wins help unlock empty stones as your spin always begins with just a minimum of 14 adjacent positions around the centre of the 64-square play area. The pays for best at 40+ symbols and minimum of 4 are: Red Dragon 2000/1x, Scarab 100/0.4x, Mask 100/0.4x and 3 Gems all paying 50/0.3x. A Wild can land which has up to 5 lives meaning it drops down after being in a win and can be used again until the lives expire by 1 for each tumble. Gold Idols are scatters and you need 3 of those for the bonus or can trigger it by activating all 64 squares in one play. There are some symbols on the unused stones which will award modifiers if you uncover them by getting wins:
Wild - gives a Wild with 1-5 lives.
Lightning - a lightning win occurs as a standard pay symbol replaces the lightning block and it will pay scattered on the whole grid.
Fire - awards fire transform and picks 1-2 symbols which transform to the same one that uncovered the Fire tile.

Free Games
Once triggered by either method described above, you begin with 5. You see far more Wilds and wins so more modifier tiles are uncovered, clearing the whole board awards +3 spins and raises the round multiplier from then on to 3x. Do it again, it rises to 6x and so-on up to 15x. Any scatters landing also award +1 spin. This is a volatile round and you can but it for 100x bet in some jurisdictions or 200x for the same one but the multiplier rises 6x for each clearance, maximum 30x. We are told the win cap is 20,000x bet.

Our View...
Cluster Tumble slot has a 96.40% RTP or 96.48% for normal bonus buy and 96.57% for the 200x 'volatile' bonus buy. The game looks good when in action with a nice soundtrack but very little seems to happen in the base game at all, in fact it is quite frustrating to watch. The feature is where the fun starts and it's hard to trigger so presumably the bonus buy is there to tempt the impatient. The feature is highly volatile and you tend to get a few extra spins and at least one board clearance for a multiplier. Trouble is, get a good spin with say five or more rounds left and it's quite common for the rest of the bonus to give dead spins when you thought you were surely in with a chance of something big. Play this at your own risk as your cash could really take a big tumble here...