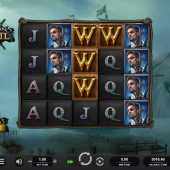 Dead Man's Trail slot by Relax Gaming is yet another volatile game with high potential, in fact the same we saw on Money Train 2 slot. We have a pirate-cum-nautical theme here with the matching music and sound effects with a pleasant seascape behind the leathery reels. A far better attempt at the genre than say the execrable Piggy Pirates slot from Red Tiger was or the even worse Wild Plunder slot from Nextgen. So can we get our bankroll on the trail to treasure here or will it be dead man's tale for our money?

On the reels...
We have 40 lines on Dead Man's Trail slot with stacked symbols and 5 reels of 4 rows, the Wilds being best 5-of-a-kind pay at 60x bet. After that, we have stacked Coins which if they appear on 3 or more reels will pay their values times stake which can be good. The other symbols are 30x Red Pirate, 15x orange, 5x Green or Blue with four card values of 3x each. Our final symbol is the Ship scatter which appears singly on all reels.

Trail Bonus
After 3+ scatters land, you are given a trail to progress round with 1-9 steps a turn. A normal cash tile pays a times stake prize, end tile stops the feature and the start tile is where you begin from and pass when you go around. You want the Mystery Chest though as this contains 11 different modifiers!
Scout - adds 100-1000x bet to a single step
Commander - adds +3-5x to every cash tile
Collect and Command - adds the total amount on the cash tiles to every cash tile
Super Reset - temporarily swaps all end tiles for Mystery Chests
Persistent Scout - same as Scout above but does it after every turn
One-Eye - multiplies the value of one cash tile 2-5x and acts 2-4 times.
Collector - collects all present cash tile values and adds to the total win
Reset - replaces all end tiles with normal cash tiles
Coin Win - random 25-50x added to total win
Persistent One-Eye - same as One-Eye above but acts after every turn
Persistent Commander - same as Commander but adds 2-5x to all normal cash tiles every turn
After a normal tile or temporary Mystery Chest has been landed on, it reverts to an end tile. Each normal tile is capped at 10,000x bet and the round is capped at 50,000x bet.

Our View...
Dead Man's Trail slot has a 96.29% RTP or 98.00% using the bonus buy for 100x bet if allowed where you are located. The game looks and sounds OK but essentially it's a rehash of the Money train 2 slot maths, but presented as a trail feature instead of reel re-spins. It's also far more volatile than that game, with buying the bonus a very risky proposition, I had numerous results of 2-10x bet for the cost so be careful! Essentially it's a 'lottery slot' which will pay very big if you get the right feature, otherwise be prepared for disappointment. Dead Man's Trail could well be Broke Man's Fail for you...