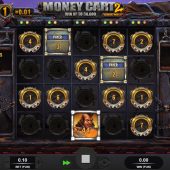 Money Cart 2 slot by Relax Gaming is best compared to, well let's say if a tree is a normal slot, this is the stump! You must see the review of Money Train 2 slot by the same developer to appreciate fully what's going on here. You have the grid over a train cart as with the above example, the same western upbeat music intermingled with gunshots and (some) of the same symbols! So can we pile a bit of this money onto our bankroll here or will it be carted off into the sunset?

On the reels...
Well, ahem! there technically aren't any reels on Money Cart 2 slot as Relax Gaming have removed them, along with all the symbols that were once on them with the exception of the bonus stake multipliers and enhancement tiles. So you pay 10-coins to play and see a grid of 20 individually spinning tiles of only blanks, bonus symbols and modifier characters of which any 3 will award the bonus.

Our View...
Money Cart 2 slot has a 98.00% RTP and is simply a lower-volatility bonus-only version of Money Train 2 to somehow bypass the bonus buy rules. It's incredibly dull and boring to play, with the player needing to put it on fast play, bang away until 3 symbols land and then 'enjoy' a bonus round that usually has a pathetic pay out. Due to the high RTP you won't be allowed to use bonus funds to play it, you won't get hits like you do on MT2 and you'll have no fun. I say get out of town fast...