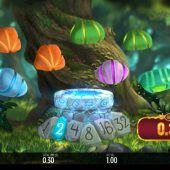 Well of Wonders slot doesn't have the traditional reels of usual slot games but 'projects' 7 symbols onto the background of which you need 3 or more to match. There is a background of an enchanted fairy tale woodland centred upon a stone well engraved with mysterious runes out of which the 7 symbols appear when you play. I am not sure what the icons actually are, as they resemble possibly forest fruits or cakes - it is difficult to tell other than they are all brightly coloured! Well Of Wonders is in fact modelled on Thunderkick's extremely popular Fruit Warp, but can we expect an equally good reception for this game?

Wishing well wins
So, you get paid for any matching symbols of 3 or more up to the maximum 7. The best 7-of-a-kind win is the red gem (in a hat?) which awards 50x stake but only 0.7x stake for the minimum 3 matching. The lowest payers are the blue (rune stones?) which pay 8x stake for 7 but only 0.2x stake for 3. There is a reason for these low pays, and that is each successive win removes the winning symbols and replaces them afresh, each time doubling the multiplier for the next win.

You start on a basic 1x and then successive wins award 2, 4, 8 16 and finally the peak 32x multiplier which is displayed on the stones that surround the well. There is a Wild which can appear too. This formula is an exact replica of the Netent slot Big Bang, and so we see the idea for the game - a hybrid of Fruit Warp and Big Bang! There are no free spins unlike in Fruit Warp and the only feature is in-play: a Fairy may appear on a losing combination, remove all single symbols and increase the multiplier one level for in effect a 'second chance' respin. And that's all folks!

With Well of Wonders slot Thunderkick have managed to use a popular idea and essentially ruin it by removing the free games and replacing them with an increasing multiplier. Mixing two good ideas from two separate games doesn't always make a winning formula and this a prime example in my opinion! The graphics are very good, the RTP a reasonable 96.1%. You could in theory land 7 red icons on a 32x multiplier which would pay a 1600x stake but chasing that Holy Grail on a game with these mechanics would prove unbearable for most. You could abbreviate the game's title to 'WoW' which is kind of ironic here. This is certainly one well I won't be throwing my change into...