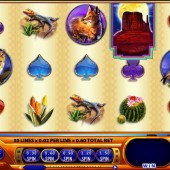 It's hard to find a land-based casino, from Vegas to Blackpool, that doesn't feature a WMS-produced slot, so respected are they in the slots market. This is the strength of the WMS Gaming brand and this is exactly why every slot they release attracts such a large amount of attention and this Buffalo Spirit slot is just another example of that popularity.

With titles like the mesmerizing Wizard Of Oz - Wicked Riches slot and the Greek mythology-themed Zeus III slot revered among casino-goers, the pioneering developer produces exciting slots which are packed full of features, and it's no wonder that WMS Gaming subsidiary Williams Interactive have made the array of WMS Gaming slots a highly successful transition to the online market.

Buffalo Spirit is a 5 reel game with 30 pay-lines fixed. As you’d expect with its Native American theme, animals feature prominently. The buffalo is ably supported by a cast of wild beasts including eagles, foxes, lizards, snakes and owls. Slightly less spiritual – but no less striking - are the cactus, diamonds and card symbols.

Did I mention that the buffalo plays a key role in Buffalo Spirit? Well, the buffalo acts as the Wild. Our furry behemoth substitutes for all other symbols other than the Scattered Rock. In fact, not content with one buffalo Wild, WMS have installed a second buffalo Wild into the game.

Wild 1 – the buffalo inside a square frame – appears on reels 1, 2, 4 and 5, whereas the second buffalo Wild – this one is inside an oval frame – appears on the third reel. He’s rather special, as when he completes a winning pay-line he’ll trigger a Replicating Wild feature. The symbol it replicates will be taken off the reels and replaced with Wilds. This is similar to the Replicating Wild Dragon in the fantasy-themed Dragon's Inferno, also from WMS, and like that game, the feature cropped up quite regularly for me.

Win up to 40 Free Spins with the Rocky Scatters

Remember the Rocky Scatter? Get three or more of those bad boys on the reels and you’ll trigger free spins, with 40 up for grabs if you get five Scatters across the reels. For three Scatters you can still win 15 free spins, so there's plenty of chance to win big. Not only that, but all wins are doubled during the free spins feature. Again, this is a straight replication from WMS's Dragon's Inferno slot.

As a general rule, slot game developers only generally take on a 'buffalo-themed game' if they know that they can do it some justice. It was a precedent set by the infamous Buffalo slot from Aristocrat and has remained that way ever since. Games like Buffalo Blitz from Playtech and Gamesys' Buffalo Wild Wins have also added to theory that you should not make a poor Buffalo game. That being said, WMS have done that old developer trick of taking a popular game engine (in this case Dragon's Inferno) and slightly tweaking it to produce this particular slot. For your average player, they will not notice a thing, but for seasoned players they will be slightly irked that WMS didn't try a little harder.