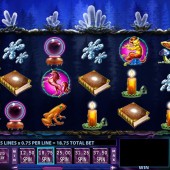 Crystal Forest is a 5 reel, 25 pay-line mystical themed slot game released by casino games developer WMS Gaming. It is one of the first titles in the WMS portfolio to be upgraded to HD, which possibly means the developer has a lot of faith in this slot.

The game is one of the most inventive and creative slots in the WMS Gaming slots range and will appeal to fans of the developer’s other slots including the Irish-themed Leprechaun’s Fortune and the enchanting Wizard of Oz - Ruby Slippers.

Symbols in the game include all things magical and make believe such as Unicorns, Dragons, Crystal Balls, Spell Books and Fairies. The Wild symbol substitutes for all other symbols to complete winning combinations and appears on reels 2 to 5.

Crystal Forest’s use of the cascading reels is a nice change of pace from other slots out there. If you hit a run of cascading reels you can really see some nice wins on this slot. These cascading reels do occur more frequently than you would think so it is an exciting feature with massive potential. If you ever get bored of Crystal Forest then you may want to try IGT's Pixies of the Forest, which is also from WMS. It has a similar theme, but also some unique characteristics to the game.