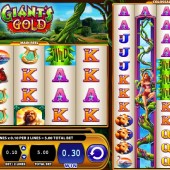 Fans of innovative slot developer WMS Gaming’s Colossal Reels slots will be licking their lips with anticipation at the prospect of this slot game that is another slot to possess the popular feature.

Previous WMS Gaming slot releases such as the Roman-themed Spartacus – Gladiator of Rome and the legendary rock group inspired Kiss slot have also provided the Colossal Reels feature with a fantastic reception from players that have enjoyed the slots. So it is no surprise that big things are expected of this release. The big question is whether or not this slot lived up to the hype that its success in the land-based casinos produced.

Giant’s Gold is a 5 reel, 100 pay-line slot that has a theme based on a kind of more sexed up version of Jack and the Beanstalk. Replace Jack with a scantily clad sexy lady and you get the idea of what this slot is all about.

As with previous Colossal Reels slots from WMS Gaming the Wild symbols appear on both sets of reels. If four Wilds appear stacked on the main set of reels then this will trigger a transfer of symbols that will turn the corresponding reel on the Colossal Reels entirely Wild. All payouts are also evaluated after the Wild symbol transfers.

The gold egg Scatters also appear on both sets of reels and you can trigger the free spins bonus round when you hit three or more of the symbols across both sets of reels. You can win up to 100 free spins when this bonus feature is triggered and all winning combinations achieved on the Colossal Reels will reward a 2x multiplier.

The theme of this slot echoes other slot releases such as WMS Gaming’s magical Fairy’s Fortune slot and NetEnt’s Jack and the Beanstalk slot but the inclusion of the Colossal Reels feature will be something that will resonate with WMS Gaming slots fans. There’s more pay-lines, there’s more opportunities to win and the action is much more frenetic. This is slots gaming at a high-octane level so strap yourself in and get set for an action-packed slots session. Go hard or go home! 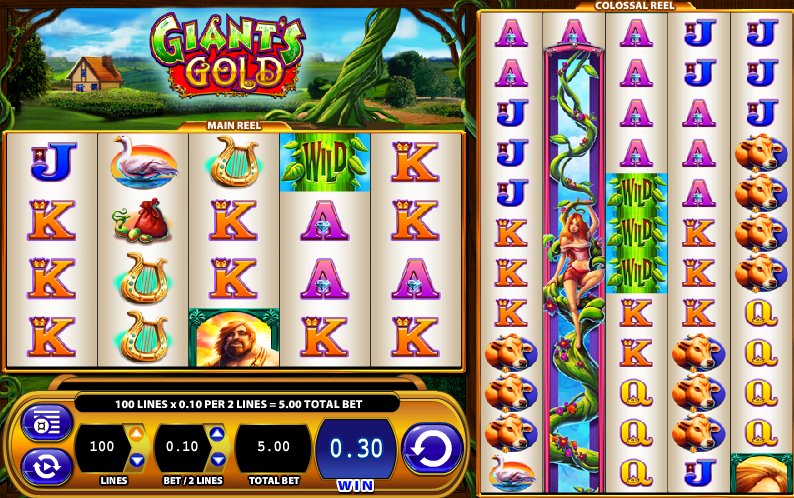