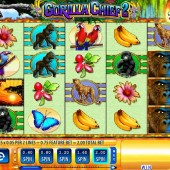 Released in a single batch along with games like the Native American-themed Buffalo Spirit slot and the martial arts Bruce Lee slot, Gorilla Chief 2 from exciting slot developer WMS Gaming offers Vegas casino thrills on your PC or Mac.

Luckily, Gorilla Chief 2 offers a few better graphics and gameplay than some of WMS's other rather slipshod online titles (yes, that's you, Casino Island), and here there are a few more attractive features to be enjoyed. That is the major benefit of sequel slots, they usually learn from the weaknesses of their predecessors and at first glance it does appear that Gorilla Chief 2 is certainly one of those slots that is much stronger than its previous incarnation.

The game is a 5 reel, 4 row, 50 fixed pay-line game. As with other WMS online slots there's a fairly generous betting adjuster. In fact you can pick anything down to the penny - you can even go for $3.33 a spin if you want. Whatever you bet you will also bet on the game's second feature (see below), so it's important to factor this into your betting (for example, if you bet $0.50 per line - or $25 - you will add on $15 for the feature, making a total of $40).

The regular symbols in the game are the gorilla, a wickle baby gorilla, a cheetah, some parrots, a chameleon, a toucan, a butterfly, a banana, a flower, and a fruit. The gorilla's terrifying fizzog is the Wild, substituting - as it does in that quirky way Wilds tend to do - for all regular symbols in the game other than the Scatters. It only appears on reels 2, 3, 4, 5 too, it's worth mentioning (perhaps down to something like gorillas' aversion to reel 1s).

Hitting three Savannah symbols left-to-right - that's reels 1, 2 and 3 to you and me - triggers the free spins bonus feature with 10 spins awarded. During the bonus round additional Wilds are added to the reels and the spins can be re-triggered.

There's another super feature to check out in Gorilla Chief 2 - the Hot Hot Super Re-Spin. It requires an additional bet of 15x the line bet per two lines, which is added to your overall bet before spinning. And what does it do? Well, if you hit stacked symbols on reel 1, two free re-spins are awarded. First, reel 1 will be held in place and any matching symbol or Wild landing on reels 2, 3, 4 and 5 are also held. This can lead to some serious bonus wins.

While certainly more entertaining than its predecessor, the sequel offers slots junkies plenty of action. The 50 fixed pay-lines and additional betting mean the slot is higher variance than other games, but for fans of big bets, there's not much to rival it.

And while we're on the subject of big jungle-based action, try out the stalwarts of big-money slots fun: the progressive jackpots of Microgaming's Mega Moolah and the fruity action of Big Kahuna, also from Microgaming.