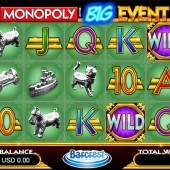 Monopoly is arguably the biggest brand of board game in the world and it has enjoyed a run of successful releases in the slots market under the ownership of IGT. Titles including the impressive Monopoly Pass Go slot and the equally brilliant Monopoly Here and Now slot helped to establish Monopoly as a major brand of slot. However, WMS Gaming took control of the Monopoly brand online gaming licence from the grasp of IGT and the game has been changed.

Monopoly Big Event is the first Monopoly brand slot released by WMS Gaming, under the Barcrest flag, and is a 5 reel, 20 payline game. The visual side of the slot will strike a chord with fans of the IGT titles but that is really where the links end.

Symbols across the reels include Mr Monopoly, various playing pieces such as the battleship, car, cat, dog, and the regular 10-through-to-Ace symbols that fill up the remaining positions on the slot's reels.

The Wild symbol is represented by a big Wild icon. This symbol substitutes for all other symbols, except for the Monopoly Big Event logo and the Go To Jail symbols, to complete any possible winning combinations that appear on the reels on a single spin.

It Is All About the Big Event!

The main bonus feature on this slot is the Big Event Bonus. This is triggered by hitting three or more Monopoly Big Event logo symbols across the reels. The Monopoly Big Event logo symbols only appear on reels 1, 3, and 5 but they can appear Stacked. If you trigger it with four symbols then you will get a house sneak preview. If you trigger it with five symbols then you will get a hotel sneak preview. The house sneak preview will reveal chance card positions of the three houses. The hotel sneak preview does exactly the same but for the three hotels. Community chest and chance cards are then chosen alternatively. Community chest cards will reveal a number of free spins and guaranteed wins. The chance cards can reveal bonus symbols. If you reveal three of the same symbol then that symbol's bonus will trigger with the number of free spins and guaranteed wins collected up to that point being activated.

Keep an Eye on the Guaranteed Wins

Monopoly Big Event also comes with a Big Bet feature that will be familiar to players that have played Barcrest slots before. This is where you get rewarded for betting larger amounts. For example, if you are betting $20 per spin then a Progressive Win Multiplier is added to wins on each spin up to a 5x multiplier. If you are playing at $30 per spin then this will trigger the bonus wheel that spins to reveal one of three mini bonus features that will be introduced. These consist of the Progressive Win Multiplier, as explained above, Epic Spins where a 5x multiplier is added to each spin and any wins that occur on those spins, and Persisting Wild Big Event where the Monopoly Big Event logo acts as a Locked Wild for 5 spins.

This slot is a truly epic title from WMS Gaming and it is great to see them release it in partnership with Barcrest. The whole set up of the slot might be a slight bit confusing for non-Monopoly fans but those of you that have experienced previous Monopoly-themed slots will catch on fairly quickly. The Big Event Bonus is where all the action happens unless you activate the Big Bet feature but even then the mini features are not life-changing. I feel this slot has longevity though. I loved the Monopoly slots from IGT and even the lacklustre Monopoly Dream Life was a top slot in my opinion. I'm expecting this slot to stick around for a while and I'm already looking forward to the next Monopoly branded slot by WMS Gaming.