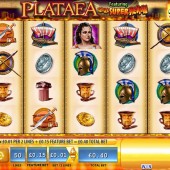 Plataea is a 5 reel, 50 payline slot from innovative developer WMS Gaming that has a theme based on the Ancient Greek city of the same name. It was the site of the famous historic Battle of Plataea back in 479 BC where an ally army of Greek city states successfully defeated the Persian army.

Symbols on the reels of this historic slot include a Greek boat, a shield and sword, a Greek soldier's helmet, a sword, a vase, a gold coin, and a silver coin. These coins fill the reels instead of the usual regular 9-through-to-Ace symbols which makes a nice change and gives the slot a more authentic feel.

The Wild symbol is represented by the face of a Greek soldier. It acts as a substitute for all other symbols, except for the Scatters and Bonus symbols, to complete winning combinations and pay out cash prizes on any spin. It only appears on reels 2, 3, 4, and 5.

Earn a Cash Prize in the Shield Bonus

There is a Shield Bonus on this slot and this is triggered if you hit the shield Bonus symbol anywhere on the reels. This will then reveal a random symbol, except for the Wild and Scatters, and award a pay out relating to that symbol.

There's Hot Hot Super Re-Spins!
Slots fans, particularly players that love their WMS slots, will also be delighted to hear that this slot comes with the innovative Hot Hot Super Re-Spins feature that has become a flagship feature for WMS slots over recent years. As part of this feature, you must get four Bonus symbols on reels one and if this happens then they will remain in place for three re-spins with any extra Wilds or Bonus symbols that appear also being held in position for the remainder of the re-spins. There is huge potential to hit big pay outs with this feature.

Plataea has not become one of the stand-out slots from WMS and, to be honest, I don't know why! It lacks the fan fare that other WMS slots such as the epic Zeus III and Roman-themed Spartacus – Gladiator of Rome received but I've not been able to stop playing it since I got my hands on it. I'm always keen to see a Hot Hot Super Re-Spins feature on a WMS slot and this is no different. The Shield Bonus is also a great little inclusion and I love the history behind Plataea so this is a winner for me. One of WMS Gaming's best kept secrets.