This 4x5 reel, 20 pay-line slot from WMS Gaming comes with a Supercharged Reels engine. Players can hit Stacked Wilds and win 8 free spins with a 2x multiplier on this slot. 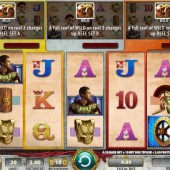 Roman Chariots is the four sets of 5 reel, 20 pay-line release from creative developer WMS Gaming that many fans of the slots developer are seeing as the unofficial sequel to the well-received Spartacus – Gladiator of Rome slot that built a bit of a cult following. Let's be honest, everybody loves a Gladiator theme. It might not have Russell Crowe screaming "are you not entertained?!" but it certainly excites on many other levels.

This slot has already gained firm support because of its innovative offline Supercharged Reels engine that offers players something a bit different. Roman Chariots is, of course, a Roman-themed slot and symbols on the reels consist of swords, shields, helmets, Roman armour, and the regular 10-through-to-Ace symbols.

Earn 5 Free Spins on the Smaller Sets of Reels

The smaller sets of reels will only spin when you hit the free spin symbol on reels 5 of the main set of reels. This will see all three smaller sets of reels spin 5 times and give you the chance to win some pay outs on those reels. The smaller reels will be reset to their original form if you hit the Reset symbol on reel 5 of the main set of reels. Confused? I don't blame you but you'll get used to it!

WMS Gaming has been on a roll recently with the epic 6 reel releases of the Greek mythology-themed Zeus III and the ground-breaking Raging Rhino slot. This release kind of slipped under the radar, probably because you need a maths degree to understand it. However, give it some play time and you will soon be sucked in. This is well worth investing time in.