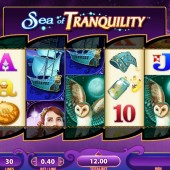 Slots developer WMS Gaming produce some of the most popular brands of slots across the market with their slots based on an array of themes from the Roman era to Greek mythology to animal themes. I think this is the first time I've played a slot that has a sleeping theme (my colleague has just reminded me of Betsoft's Under the Bed, which is more a slot about nightmares than sleeping in my opinion).

Sea of Tranquility is a 5 reel, 30 payline slot from WMS Gaming that has its name gain inspiration from the lunar mare located on the moon. It is used to convey a theme of sleep and peace on this slot with the crescent moon in the game logo catching forty winks!

You could argue that the angle here is dreaming. The symbols on the reels include a serene-looking female, a bottle, a gold coin, a ship, and an owl... imagery all synonymous with dream scenarios. There are also the standard 10-through-to-Ace symbols.

The stand out feature for Sea of Tranquility is the Close Enough feature. Have you ever found yourself cursing your luck when a Wild or third Scatter that is required to trigger a free spins bonus round falls just outside of a position on the reels? You can see it but you can't touch it. Sea of Tranquility takes those frustrations and casts them to the four winds with the Close Enough feature. On the reels on this slot you will see that the symbols that fall just outside the positions on the reels will come into play if they have a Wild or Bonus symbol appear on them.

Look Out for the Expanding Wilds!

The Wild symbol is represented by the shooting star and acts as an Expanding Wild across the reels. This symbol will act as a substitute for all other symbols across the reels, except for the Bonus symbols, to complete any potential winning combinations.

Earn up to 50 Free Spins with a 25x Multiplier

The sleeping crescent moon acts as the Bonus symbol and if you hit two or more of these across the reels then you will trigger at least 7 free spins with a 2x multiplier. This is a great inclusion on this slot. Not only do you need one less Bonus symbol to trigger the free spins on this slot than you usually do on other slots but the Close Enough feature ensures you have more chance of hitting those two Bonus symbols on every spin. There is the potential to hit up to five Bonus symbols on one spin and this will see you trigger 50 free spins with a 25x multiplier. In addition to this, during the free spins, the female, ship, and owl symbols act as Expanding Wilds that substitute for each other to increase the chance of hitting winning combinations.

Sea of Tranquility is a delight to play and it's no surprise that it is a WMS Gaming title. You look at previous WMS slots such as the 6 reel Raging Rhino slot and the high profile Zeus III slot and you can see why they are such a highly regarded developer. The Close Enough feature is something that is a stroke of genius and it takes away that frustration element that can often ruin your slots experience. The free spins and multipliers that can be triggered are also mind blowing. This is a must for slots fans, particularly WMS disciples.