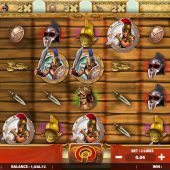 Spartacus Call to Arms slot differs greatly from WMS's original Spartacus with its Colossal Reels set-up and relatively low base game potential. This new version themed on the brave Spartan warrior has a unique new feature and reverts to a standard reel set. The graphics are quite basic with the reels set into a wood plank background in front of a temple with the dramatic rolling fighting-style music and sounds you may have heard before on Nextgen's similarly-themed 300 Shields slot. So it is wise to take on this particular Spartan?

There are 50 pay lines over 5 reels of 4 rows each but you only need bet 25 coins to play. The symbols appear singly and in stacks of two and there are no Wilds (yet) - they consist of various Spartan icons with the Golden Helmet paying 30 coins for 5-of-a-kind, the Silver Helmet 25 coins and the minor symbols of shield, statue, sword and coins giving 20 down to 10 coins respectively. These pays are quite low for reasons we shall discover but there are the male and female Warriors paying 80 and 75 coins as the top icons.

You will notice that there are 4 spaces either side of the reels and these randomly fill with icons from the reels bar the scatter, and there is a Wild game logo too. If this appears in 1 or more of the 8 spaces, it is projected onto the reels into a random position but won't cover a scatter (or in the free spins) a Wild. This is where the game's potential lies as if you get 2 or more of the same symbol in these 8 spaces, you are awarded a multiplier for any win involving that symbol on the reels for that spin as follows:

When you see 3 Golden Lion scatters on reels 1, 3 and 5 you will be awarded 10 free games and during these the multipliers above will be doubled, thus making it possible to win 500x the best 5-of-a-kind on any one pay line. This would be 1600x bet for the male Warrior and your chances are improved too as you will now see Wilds added to all the reels as opposed to them just being available via the 8 spaces in the base game. You can also retrigger these games.

Spartacus Call to Arms slot is a completely novel idea, which it is always nice to see from any developer. You have big potential and a decent 96.05% RTP too. The obvious drawbacks are the very low partial-credit wins in the base game and unfortunately WMS have placed the win amount window over the top of the start button so for impatient slotters, who like to start-stop the games rapidly, are unlikely to be happy waiting for that animation to finish! The graphics and sounds are basic like most WMS games and I have to be honest the big potential seems quite pie-in-the-sky because playing hundreds of spins you would be lucky to see 6 or more similar symbols in the spaces which you would need to add the 25x or better multiplier above the reels for that spin. If you take on Spartacus come well armoured because you'll likely take quite a beating...