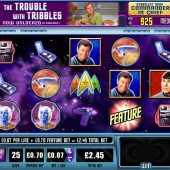 Gambling geeks of the world, rejoice! Slots pioneer WMS Gaming have gone where no man has gone before and adapted one of their hugely popular land-based slots for the online market once again. Actually, that's a lie: WMS have gone where plenty of developers have gone before, adapting games that have had a successful shelf-life in the big casinos so you can enjoy the same great gameplay at home... in fact, this is not even the first Star Trek slot they've released online. Star Trek - Red Alert was its debut release and that enjoyed a great reception.

On the Reels...
As with Star Trek - Red Alert, Explore New Worlds is a 5 reel, 25 payline slot based on the original 1960s series starring William Shatner as everyone's wise-cracking captain and Leonard Nimoy as everyone's green-blooded science officer, Spock. Both characters appear on the reels, along with the Starfleet badge (here the top payer), Dr. McCoy, a phaser (set to stun, presumably), a blue alien, a communication device that looks like a 1996 Motorola, and, of course, the Starship Enterprise.

Pick Your Win in the Beam Me Up Bonus

Three or more Scattered Feature icons on the reels anywhere triggers the Beam Me Up Bonus. Essentially, it's a Pick 'em Bonus where you choose a crew member to accompany the main characters on an alien planet, then pick (or shoot at) various objects on the planet surface. You will either reveal cash prizes or another Pick Crew Mate icon, in which case choose someone else to beam down to help. If you select the alien bad guy your turn ends (unless you find him within your first three goes, however, in which case you get a second chance). A Star Trek medal is awarded every time you select a Pick Crew Mate symbol or the phaser.

The 'Win Warp Feature' is triggered at random if you are betting an extra 10x your line bet. While that may seem like a big gamble, it can prove pretty lucrative. The bonus feature has four levels: first, the Rock Creature Multiplying Wild sees the creature appear and leave behind a multiplying Wild (of 3x-10x) anywhere on the reels. Scotty's Wild Reel sees the engineer giving it everything he's got by appearing and filling an entire reel or two with Wilds. Again, the Wilds substitute for all regular symbols other than the Scattered Feature icons. The Spock Multiplier can appear and multiply wins 3x to 10x. And finally, the Enterprise Fly-By sees Kirk's ship race across the reels, turning all winning combos into Kirk, McCoy or Spock icons, Star Trek logos, Feature symbols or Star Fleet badges.

For fans of the original series, this game is a must-play. It's worth noting, however, that you should kick off with Star Trek - Red Alert as the first in the series of Star Trek slots. Only by accruing enough medals in that game can you unlock this game. Just look above the reels to see how many medals you need to progress. And if you like this, make sure you seek out exciting new worlds in the shape of Star Trek - The Trouble With Tribbles which is another instalment in the WMS-developed Star Trek slots.