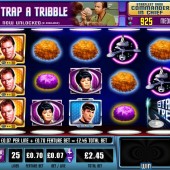 Trekkies of the world (or 'Trekkers' as they prefer to be called) prepare to get excited! If you thought slots developer WMS Gaming's Star Trek slots stopped at Star Trek - Red Alert and Star Trek - Explore New Worlds, think again. The Trouble With Tribbles - based on a classic episode of the 1960s TV sci-fi series - is packed with interesting features and, like its predecessors, some nice bonus rounds.

In the episode, the Starship Enterprise journeys to Deep Space Station K7 where Uhuru is presented with the furry alien pet. Pretty soon, however, thousands of the blighters are running around the Enterprise. They may look cute but heck are they irritating little fur balls.

This Slot Needs to be Unlocked!

First up in the game, it's important to note that you will need around 200 Star Fleet medals to play the game. These can be earned by playing the first two Star Trek games in the series and cracking enough of the bonus rounds to qualify.

On the reels - 5 of them here housing 25 paylines - we find familiar Star Trek characters like Spock, Uhuru and Captain Kirk, plus a deep space station and the Starfleet logo. There are also various Tribbles - the mischievous alien critters that famously took over the Enterprise in the episode the game is based upon.

The first thing to note about this game is that the reels don't spin; rather, the symbols 'beam down' a la the Enterprise transporter room. This makes for a much more authentic Trekkie experience overall, and also looks pretty damn cool.

Trap the Tribbles to Win Prizes

Look out for the Feature logos, as three or more of those on the reels anywhere activates the Tribble Pinball Bonus. Furry tribbles bounce around the screen and fall into the tubes at the foot of the screen; each slot awards a different cash prize. Look out too for the 2x cup (which doubles wins) and the Extras cup. If tribbles fall into that, they will be let free at the end of round (once you hit the Collect sign). Like the other Star Trek games, the Win Warp Feature - essentially a 4-games-in-1 bonus - triggers at random.

Trigger up to 10x Multipliers and Wild Reels

The USS Enterprise Fly-By sees Kirk's ship fly across the screen and turns winning combos into one big symbol for bigger wins. Scotty's Wild Reel sees our friendly Scots engineer expand to fill one or two reels and act as a Wild. The Spock Multiplier sees the Science Officer multiply wins from 3x to 10x at random; and finally, the Rock Creature Multiplying Wild sees this alien appear on the reels and leave a random multiplier on wins from 3x to 10x.

Packed with interesting features and a must-play for any self-respecting Star Trek fan, if you've managed to get some time in on WMS's Star Trek Red Alert and its follow-up slot Star Trek Explore New Worlds, there's no excuse not to push on to go where no man (or woman) has gone before and explore this slot.