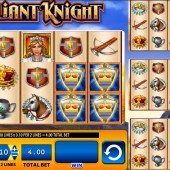 If WMS Gaming weren't creating enough waves in the slots industry with medieval-themed slots in the form of the illustrious Black Knight slot and its sequel effort Black Knight II then this Valiant Knight slot will only add further power to the developer's arsenal.

Valiant Knight is a 5 reel, 80 payline slot that is very similar in its tone to the Black Knight slots. It uses a Super Multi-Pay feature which can also be found in the Bruce Lee – Dragon's Tale slot. This is gives the slot more ferocity which is never something I am disappointed to see.

The Super Multi-Pay reels layout is very unique but fans of the Bruce Lee – Dragon's Tale slot will be more than familiar with it. The layout is one main set of reels set up in a 5x3 format and then three small sets of reels that also have a 5x3 set up. Potential wins can be triggered on all four reels.

The symbols on the reels include the medieval queen, the servant, a horse, crown, ring, shield, crossbow, goblet, and a dagger. The Wild is represented by the Valiant Knight icon and he is not only the top paying symbol but also substitutes for all other symbols, except for the Scatters, to complete potential winning combinations.

Valiant Knight is certainly a slot to look out for. It gained a reputation for delivering big wins in its land-based format and the transition to the online platform appears to have carried that reputation over. There is little depth to this slot which is big shame, as it is an interesting format. There is little beyond the free spins bonus round but the potential wins to be had from this bonus feature ensure that this one feature will keep you hooked for long enough to make playing this slot worth your time.