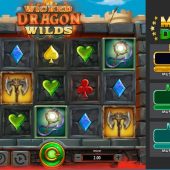 Wicked Dragon Wilds slot by Scientific Games is a good looking game that promises some modernity and excitement instead of the pretty mediocre slots we've seen recently from this group. Here we have the reels set in the hefty stone walls of a medieval castle with classical music from the era playing as we spin and of course some dramatic bangs and roars when wins appear. The Dragon is a hugely popular theme for slots and it's rare a month goes by without at least one release and lately we have seen Dragon's Luck Megaways from Red Tiger and Blueprint Gaming's equally volatile Dragonfall and even Microgaming have got in on the act with the pretty tame Dragon Shard for those who like the fire a little less hot. So could our bankroll be in for a wild time or will it be a wicked drop to zero here?

There are 20 pay lines on Wicked Dragon Wilds slot and the symbols appear singly. Before we begin playing though, we must pick which Wild Mode we want to play in which I will explain after the pays are discussed. These are 50x bet for 5-of-a-kind Wilds which appear as Green Dragon Eyes and pay the same as the highest standard icon, the Blue Shield. Thereafter we see 25x for the Red Crystal Torch, 15x Diamond Sceptre, 10x Axe and finally four card suits all pay 5x for a full line. You have scatters in the form of a Red Dragon on reels 1, 3 and 5 too, but we really need to discover what the Wilds can offer!

Firstly, you do get one random modifier in the base game called the Dragon Fire Bonus which is simply the Dragon appearing during your spin and sending fireballs to one or more positions on the grid which turn into Wilds.
You get to choose how you want your standard base game Wilds to act though and can change this mode when you like.
Respin Wilds - any spin in which Wilds land but don't award a win will freeze any reels with a Wild on and keep respinning until you get a win.
Spreading Wilds - any Wild appearing will send 1 to 5 fireballs onto other positions and turn them Wild too.
Persisting Wilds - any Wilds landing will trigger a respin. You only get one respin unless another Wild lands which will also stay in place and trigger a second respin and so-on.

Well, we should call this 'Free Game' as you only get one spin! Land the 3 Red Dragon scatters on reels 1, 3 and 5 and they will merge to create one colossal 3x3 Wild over the centre 3 reels. The outside 2 reels then spin and you get the win.

By the right of the reels there are 3 progressives shown. They are randomly triggered and are timed in order to guarantee them being won by a certain hour. This may or may not appear at the casino you play the game at.

Wicked Dragon Wilds slot is a jolly decent medieval jaunt with the option for the Wilds making the base game interesting if not hugely rewarding as Wild lines are rare, but there's plenty of wins in the low-tens times range. The graphics aren't juvenile and we see good animations and sound effects, none of which tire the player. The RTP is 96.15% with the jackpots included, but be aware that it's only 94.15% without them so it's preferable to play at sites that offer the progressives. The bonus round is very quick being only one spin and it's all about matching high symbols on the same row on reels 1 and 5 otherwise you won't be seeing wins of over 100x bet unless a Wild lands on one of them. I did find the game entertaining but you won't be getting any wickedly large wins here...