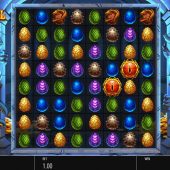 Dragonfall slot by Blueprint Gaming is a pretty shameless copy of the Push Gaming Jammin' Jars mechanic. The reels here are set in stone in a creepy underground dragon's lair full of gold and gems, with creepy and ominous music playing as we spin. These cluster pay games are all the rage lately and we have had some decent and less good ones from a variety of developers. These include Red Tiger's Tiki Fruits and Play'n Go's not so good Honey Rush, with Quickspin's Golden Glyph possibly the most entertaining of these three. So will our bankroll fall along with this dragon, or will we be able to leave with some of those tempting treasures on display here?

We get a cascading mechanic here of 8 columns of 8 single tiles each so 64 in view. You need an adjacent cluster of 5 or more of the same symbol to win on Dragonfall slot and the pays go from 5 to 25+. There are only 6 symbols which pay for the top 25+ clusters at Fire Egg 100x bet, Gold Egg 62.5x, Purple Egg 37.5x, Green or Bue 25x and Bronze 10x. The basic 5-cluster pays are 1x for the Fire Egg down to 0.1x for the lowest Bronze one. All winning symbols are removed and fresh ones cascade from above in the respective columns so you can win multiple times in one spin for which you pay 20-coins.

These can appear anywhere and have an increasing multiplier. So if you get one or more involved in any winning cluster they will increase 1x for each time they are used, multiplying each other if more than one is present in the cluster. They move to a vacant position before the next replacement tiles cascade down and reset when the winning sequence ends.
You may on some spins get the Dragon's Roar modifier and the reels will have colossal 2x2 up to 4x4 symbols land on them, creating a win. This doesn't occur in the free falls though.

Those Dragon Eye Wilds are also scatters and 3 of them in view will trigger 6 free games. The Dragon's Eye Wilds will not see their multipliers reset between the free games and have an unlimited increase. They act in the same way as the base game and any multiplier earned on them in the triggering base game is carried forward into the feature. You can also see a fourth Dragon Eye appear during the bonus but the most you'll ever see is three of them counting in one cluster. They also move around between each free spin so if separated too far, you'll be hoping they move closer together in order to make winning cluster more likely.
This feature is very volatile and pre-scripted, so your win is decided on a lottery basis upon trigger. You can get in excess of 20,000x bet so even a small cluster of say 6 low-paying Eggs with three multiplying Wilds can pay big wins, if say those have reached 15, 17 and 22x respectively - they can go even higher than that. Very exciting to behold if you have triggered the lucky feature!

Dragonfall slot is going to be very popular simply because it is a near-carbon copy of an existing and hugely successful slot. It looks and sounds very good with great graphics and animations and a decent 96.46% RTP is in play here as well. So I only need to be brief here as Blueprint have brought out a slot with serious potential which gets them 0/10 for originality and a higher score for the polished appearance. You could easily fall for this dragon if he bestows one of his massive pays upon you...