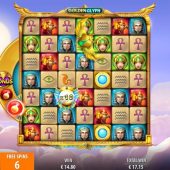 Golden Glyph slot by Quickspin brings us into the ancient desert world of Egypt with a fantasy background of being above the clouds and nearer the sun, as we try and get near Ra. The game is clearly an answer to Play'n go's grid games such as Viking Runecraft which is very popular as is their Moon Princess and Red Tiger too have got in on the act with games such as Tiki Fruits. These can all show big win potential, so will the eerie music of the glyph play the right note for our bankroll, or are we really too near the sun?

Tumble mechanic is where we're at here on the Golden Glyph slot 7x7 grid and new symbols are dropped in to replace winning ones until no more combinations occur. You need 4 or more adjacent symbols in a cluster and you get a scale of pays from there up to 15+ with pays anything from 0.4x to 100x for the numerous tile types. The main point is that as well as bonus tiles, there is a Power Wild created and placed in one random position where the first winning tiles were removed from. If it created another win, you will get another Power Wild and so-on but only one can appear each action.

The Power-Ups will be activated when you get a Power Wild win. There are 4 modifiers. You may get the Golden Scarab, Eye of Horus, Blaze of God, plus the Free Spins Bonus Power-Up. At the beginning of each spin, 5 Power-Ups are randomly placed on the golden wheel to the left. The last Power-Up is always the Free Spins Bonus Power-Up, the remaining four are randomly awarded from the other Power-Ups of Golden Scarab, Eye of Horus and Blaze of God.

Golden Scarab Power-Up - 4 to 10 random Wilds placed on the grid.

Eye of Horus Power-Up - removes low paying symbols by choosing one low paying symbol and removes all occurrences from the grid which are replaced in a tumble. Each removed symbol will also award 1/20 of your current bet.

Blaze of Fire Power-Up - burns all normal symbols that the flames randomly hit, except any Wilds in view. They are replaced in a tumble and each removed symbol will also award 1/20 of your current bet.

Free Spin Bonus - When activated you get 9 free games and 3 for any retrigger. During the first free spin, the special Golden Glyph Wild symbol will be placed in a random location. This increases in Multiplier each time used and remains on the grid but moves position after each use. It can rise to 99x maximum and this is most likely how you'd get the Golden Glyph slot maximum pay of over 13,000x bet. You can still get the other Power-ups during the bonus.

Golden Glyph slot is a great first attempt by Quickspin at a dedicated cluster-paying grid game, with excellent animations, sounds and music. The RTP comes in at 96.19% so is about average for most slots and despite the high potential winnings it is a medium-variance game so you can expect regular wins in the base game along with some decent hits off of the Power-Ups sometimes. It's not tiring to play and not too hard to trigger the free spins Power-Up but it can be quite disappointing on occasion, I suppose to pay for the big-hit potential. This hieroglyph may certainly translate into some fun for your money...