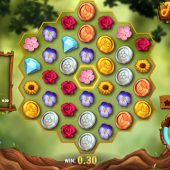 Honey Rush slot by Play'n Go is a grid game centred around a bee nest in the forest and we hear gentle music in the background and faint taps when the tiles cascade in. You may be expecting a variation of Viking Runecraft when first seeing it, or possibly Moon Princess, in fact any other of the Play'n Go grid games such as Gemix. There are a few similarities but actually you'll be pleased to here this game is simpler and has just as much potential. So will it be Honey rush or money-flush for our bankroll?

There 7 reels in a honeycomb pattern on Honey Rush slot with hexagonal tiles to resemble the natural bee's nest. The reels are in a 4-5-6-7-6-5-4 arrangement so we have 35 tiles in play and need 5 or more adjacent symbols clustered together to win. As is usual with this mechanic, the pays are quite convoluted so let it suffice to say there are 4 different flowers all paying 20x bet for 35+ in a cluster and 0.1 for just 5 and Bronze, Silver and Gold coins plus a Diamond paying 50, 75, 100x and 200x for a 35+ cluster and 0.3 to 1x for 5, the minimum cluster. There are no scatters as everything revolves around the centre position of the grid here and enhancements are cumulatively earned.

Worker - You get the medium-level one here, a cluster of 7-15 tiles of a random symbol, after any spin as a random modifier.
Drone - triggered by the Rush Meter as described below, a minimum cluster of 7 symbols.
Queen -this is the one you'll want, triggered again by the Rush and with a minimum of 20 symbols.

Level 1 - there is a meter on the right of the grid which needs 20 winning symbols in any game to trigger the drone as above, only this will add a Wild into the mix at either 1, 2 or 3x.
Level 2 - get to 40 and the Drone is triggered gain when you run out of winning combinations and another Wild is added as above.
Level 3 - get to 80 and the Drone is triggered a third time adding a third Wild between 1 and 3x. These Wilds move randomly in positions vacted by winning clusters so you'll be hoping they stay near each other in order to continue the run!
Level 4 - when 160 or more is reached, the 3 Wilds will still be there and now we get the Grand Finale, the Queen with 20+ symbols which will contain those 3 Wilds.

You can get up to 27x with the 3 Wilds in play and on the Queen event if you had 35 Diamonds or more with those Wilds you could win 5,400x in one hit, although Play'n Go tell us there is the chance of 9,000 with accumulated wins.

Honey Rush slot isn't too childish with no cartoon stuff despite the gentle music and sounds and is actually quite playable, although as with all games of this mechanic it can be frustrating seeing the meter fall just short of the 160 required for that elusive giant win! Your RTP is okay at 96.22% and the basic Drone features aren't too hard to get the 20 tiles for in order to get that first step to the big potential wins. The random worker feature comes in frequently too although you'll still see a fair few 'micro wins' of less than 0.5x bet. Surprisingly, I will rush over to this honeycomb again in future for some more sweet success...