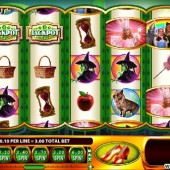 Wizard of Oz – Ruby Slippers is another incarnation from the Wizard of Oz series of slots by innovative slot developer WMS Gaming. It takes themes from the famous Wizard of Oz story with Dorothy’s ruby slippers taking the central focus.

This slot is a 5 reel, 30 pay-line game and will immediately stand-out to those fans of the Wizard of Oz slot that was previously released by WMS Gaming. Those slots players that fell in love with the Wizard of Oz story will also adore this slot.

Symbols in the game are all familiar to the story including Dorothy, Scarecrow, Lion, Tin Man, the Wicked Witch, an apple and who could forget Toto the scruffy canine sidekick of Dorothy.

Having originally been released in a land-based capacity, its arrival on the online market is long overdue and players that have enjoyed this game on the casino floor will be keen to get involved in the slot action online.

The main intriguing feature in this slot is the randomly triggered Ruby Slippers feature. When the reels are spinning, the pair of ruby slippers might click together at any time and this feature is triggered. Once triggered, a bubble will appear and will turn up to four of the reels completely Wild. In addition to this, a multiplier value up to 5x will be applied to any winnings during this feature.

Another exciting feature is the Find the Broom feature. This is triggered when you hit two or more of the feature triggering symbols across the reels and the Wicked Witch symbol on the final reel. If this is triggered then you can win up to 50x your initial stake.

There is also the Crystal Ball feature that is triggered in a similar manner to the Find the Broom feature in that you must hit two of the feature triggering symbols across the reels and the Crystal Ball symbol on the final reel. This can award you up to 500x your initial bet.

Finally, there is the amazing Emerald City Free Spins feature. If you hit two or more of the Emerald City symbols across the reels and the Wizard of Oz symbol on the final reel then you will trigger this feature. You will initially be awarded with 5 free spins but you have the chance to win extra free spins, a Wild reel, additional Wild symbols or a multiplier up to the value of 10x.

Wizard of Oz – Ruby Slippers is a classic in the making with so many thrilling features to enjoy. Few games out there can rival the sheer expanse of how you can trigger a win. For something a little different you might want to try the sci-fi classic Star Trek – Red Alert but this is a slot that will transcend taste, genre and generations.