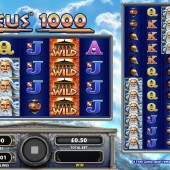 The online slots industry is scattered with titles that are part of a series that deserve respect the minute they are mentioned in a conversation. The Zeus series from the developers at WMS Gaming is arguably the most famous example and we are now treated to the fourth instalment in the franchise.

Zeus 1000 is a 5x4 and 5x12 reel, 100 payline slot that is the latest in the iconic Zeus series of slots. It has been developed through the Williams Interactive arm of WMS and builds on the fantastic foundations previously laid down by its predecessors with a strong Greek mythological theme and plenty to get excited about. The Colossal Reels layout will immediately get fans of other WMS slots such as the Roman-themed Spartacus – Gladiator of Rome and the martial arts-fest that is Bruce Lee – Dragon's Tale.

The reels are once again set against the backdrop of Mount Olympus and symbols present on the reels include Zeus himself, his throne, Pegasus, a chariot, helmet, vase, and the regular Jack-through-to-Ace symbols.

The Wild symbol is represented by the Parthenon and it has the power to substitute for all other symbols, except for the Bonus symbols, to complete any potential winning combinations that might have appeared across the reels on a single spin. Unfortunately, the Wild only appears on the 5x4 set of reels and not the 5x12 Colossal Reel Set. If you hit four Stacked Wilds on the 5x4 set of reels then you will begin a symbol transfer and this will turn the equivalent reel on the Colossal Reel Set completely Wild. If any Bonus symbols appear on that reel on the 5x4 set that triggers the symbol transfer then those symbols will turn into Wonus symbols. Yes, you read that correctly. I haven't developed a speech impediment or made a typo. Wonus symbols act as a Wild basically.

Earn up to 30 Free Spins with a 25x Multiplier

The aforementioned Bonus symbol is on the reels in the form of a thunderbolt in the hand of Zeus. Quite an epic image I have to admit. It only appears on reels 1, 3, and 5 of the 5x4 set of reels and reels 1, 3, and 5 on the Colossal Reel Set. You will need to land three or more of these Bonus symbols across both sets of reels to trigger the free spins bonus round.

During these free spins, if four Stacked Zeus symbols appear on reel 1 on the 5x4 set of reels then they will turn all Zeus symbols across the reels into Zeus Add symbols. These symbols are basically Zeus but with a tinge of red to his colour. This will add up to 1000 Zeus Add for that one spin that will be divided across every reel except reel 1 on the 5x4 set of reels. This feature is guaranteed to be triggered at least once during the free spins so you are technically guaranteed a decent-sized pay out if you trigger the free spins. Unfortunately, the free spins cannot be re-triggered but given the potential payout on the free spins that would probably be asking a bit too much.

Zeus 1000 took me a bit by surprise. The original Zeus slot was such a ground-breaking title that it still remains one of the most popular slots on the market and allowed WMS to have an almost unbreakable reputation within the slots industry. Zeus II was only released on the social platform which meant that the epic Zeus III slot was the next release on the online platform. In both Zeus and Zeus III, the games came alive during the free spins and this is very much the same for this sequel. It is also great to see WMS bring a new reel design. Admittedly, it borrows from their Colossal Reels line of slots but that's a dream for me. I love the fact they've taken a layout that works and merged it with a slot that has done so well over the years. Zeus 1000 did not receive the hype it should have and maybe that's what WMS wanted. A surprise attack on a market that is in need of a shot in the arm. I am pleased to say this is another excellent addition to the Zeus slots series.